Costello, The Roots team up on 'Wise Up Ghost' 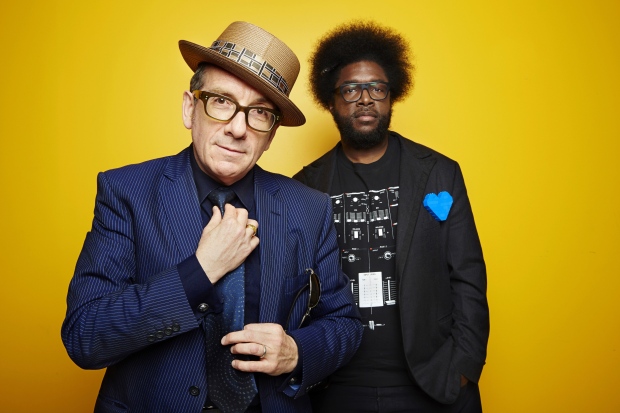 From left, English singer-songwriter Elvis Costello poses for a portrait with drummer Ahmir "Questlove" Thompson of The Roots in promotion of their upcoming album "Wise Up Ghost," on Tuesday, May 21, 2013, in New York. (Photo by Dan Hallman/Invision/AP)

NEW YORK -- When Elvis Costello and The Roots teamed up for a new album, they knew their pairing was unlikely and unconventional, so they secretly recorded music without the approval of their record labels.

"Sometimes if you ... get the record company involved, then people have ambition rather than starting to play, so we started to play," Costello said in a recent interview.

"We did it without a label or deadline pressure," said Ahmir "Questlove" Thompson as he sat next to Costello. "This absolutely was a passion project."

They began recording "Wise Up Ghost," which will be released Sept. 17, two years ago. It's a moody, 12-track album that features both new songs and others borrowed from Costello's catalogue, including the drum-filled "Sugar Won't Work," which samples from "You Left Me in the Dark," and the soft and simple "Tripwire," which takes from "Satellite."

The Roots first collaborated with Costello on NBC's "Late Night With Jimmy Fallon," where the hip-hop group is the house band. They also worked with the 58-year-old British rocker at a Prince tribute concert in March.

"This is like our dream -- that's all I can say," a smiling Questlove said. "This is the first project at 'Fallon' where I'm making my musical dreams come true."

"The thing I like most of all, the drums are really loud," Costello said. "I'm singing quite close, not having to yell to get it over."

The Roots released a collaborative album with John Legend in 2010. A year later, they released an album with Betty Wright.

Questlove says working alongside Costello, a member of the Rock and Roll Hall of Fame, was scary.