The day after the Liberal platform "reveal" the Progressive Conservatives and NDP are rushing out their responses. You can bet researchers at both parties worked overtime to find quotes, facts and even slap together quick internet ads to attack the platform.

So while families and students are already budgeting for tuition savings, the NDP is reminding Ontarians that it was the Ontario Liberal government that raised tuition fees by 30 per cent between 2005/6 and today.

The Progressive Conservatives' first response was to stick with its "tax-man" line, calling taxes the "Elephant in the Room."

"Just like in 2003 and 2007, McGuinty's platform is a transparent attempt to distract attention from the giant elephant in the room -- the fact that he will raise taxes to pay for his "promises" and out of control spending."

This campaign has taken a decidedly nasty turn.

On page 25 of the Liberal platform there is a commitment to help new Canadians get the training they need to get jobs using the skills they bring to Ontario. Under the plan, it will come in the form of a tax credit to businesses that provide that training opportunity.

The Progressive Conservative response? They don't call those skilled immigrants new Canadians. Instead, they call them "foreign workers."

The PCs released a divisive internet ad saying "Ontarians need not apply." It's a curious strategy for a party that needs seats in the GTA, home to many of those new Canadians.

Have they forgotten that in the federal election in May, the Conservative Party platform addressed the issue of helping new Canadians get jobs? Its commitment - provide loans for recent immigrants for skills training and accreditation. That strategy helped give the Conservatives a huge breakthrough in the GTA.

Every Progressive Conservative will tell you they need to win in the GTA to form the next government but the video released this morning plays to the party's base not those new Ontario voters. It will be interesting to watch the party's tone on this issue as Hudak visits critical GTA ridings again and again over the next month.

Speaking of videos…. Seems like someone could do an election note just on videos.

This morning the Liberal party sent out a release touting its latest video. It takes a poke at the NDP promise to enact a law to enforce a one-metre distance between cars and bikes.

The Liberal party, which is now in second place according to the polls, is looking over its shoulder at the NDP. The federal election is a very fresh, very unpleasant memory, for all Liberals. They know the NDP surge cost the federal party a lot of seats in Ontario.

The CP24 Nanos poll released yesterday is consistent with other public polls released last week. Of course the parties all dismiss these polls but when three of them are in sync it suggests a close race with an electorate that is not decided.

According to the poll, one in two Ontarians has decided on whom to vote for. That leaves the other half looking at what is on offer.

The fact that voters haven't decided on what they think about both Conservative Tim Hudak and NDP leader Andrea Horwath means the campaign will be critical to their chances.

Tonight the leader of the Liberal party will be on LeDrew Live. Ontarians know Dalton McGuinty. On the eve of the formal campaign the Premier is spending a good part of his day doing media interviews.

McGuinty's job may be the hardest of the three -- he has to convince Ontarians to make him the first Liberal to win three elections. 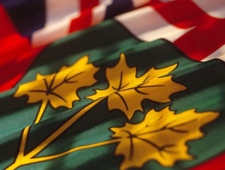