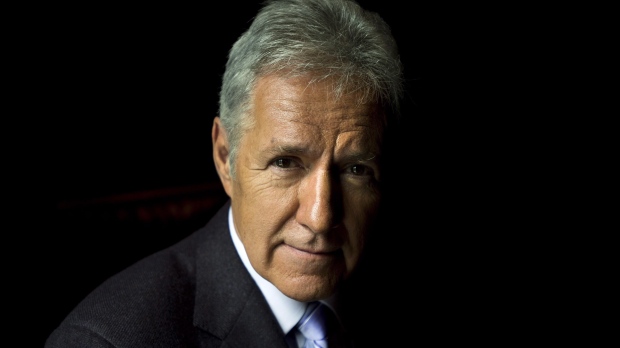 Jeopardy host Alex Trebek poses for a photograph in Toronto on Tuesday, June 11, 2013. Canadian "Jeopardy!" host Trebek will be in Ottawa today for the official opening of the new headquarters of The Royal Canadian Geographical Society. THE CANADIAN PRESS/Nathan Denette

OTTAWA -- Canadian "Jeopardy!" host Alex Trebek recently completed what he hopes will be his last chemotherapy treatment, he told the Royal Canadian Geographical Society Monday afternoon as he helped open the group's new headquarters in Ottawa.

"That stuff really kicks the slats out of you," he told his audience.

Trebek, 78, is the society's honorary president. He announced in March that he has advanced pancreatic cancer.

In a TV interview with CBS Sunday Morning that aired on the weekend, Trebek says he's continued taping "Jeopardy!" despite dealing with excruciating stomach cramps that have, at times, left him writhing and crying in pain.

But Monday, clad in a blue suit and cracking jokes from a podium, he seemed energetic and strong.

Trebek said he was disappointed all the Canadian NHL teams had been eliminated from the Stanley Cup playoffs -- before noting the country's pro-sports championship hopes are still very much alive.

"Thank God for the Raptors," he said.

The Sudbury, Ont., native has a long connection with Canada's capital city, where he studied philosophy at the University of Ottawa and got his start in broadcasting. In the society's new home by the Ottawa River -- a building first constructed as a small national museum -- Trebek talked about how busy he's been lately, including how he won his seventh Emmy award.

Prime Minister Justin Trudeau also participated in the event. He said when he was growing up his father limited TV watching at home to just 30 minutes a week, with one exception.

"When we got home from school we were allowed to watch 'Jeopardy!' " Trudeau said.

The new lease for the geographical society is meant to revive a building that's never lived up to the government's hopes for it. The former Canada and the World Pavilion opened 20 years ago. Next to the Rideau Falls, with stunning views and an address on Sussex Drive near the prime minister's and governor general's residences, it was supposed to display artifacts of Canadians' global accomplishments in fields such as sports, culture, science and international peacekeeping.

Built at a cost of more than $5 million, the pavilion was projected to draw 120,000 visitors a year but didn't, even with free admission. It closed in 2005 and the federal government spent a decade trying to figure out what to do with it. For a while, there were plans to move in some of the national honours organization overseen by the governor general but an engineer discovered water seepage and potentially dangerous mould.

In fall 2016, with Trebek also in attendance then, the government announced plans to turn it over to the Royal Canadian Geographical Society for exhibitions, events and office uses. The building hosted exhibitions beginning in summer 2017 but is only now being fully opened, a year later than planned.

On Monday, Trebek said when he invited Trudeau to attend the opening, he told the prime minister it was going to be an "easy gig" despite his busy schedule.

He said he reminded Trudeau that the prime minister's residence is "two doors away" from the building and that he would still be able to make it home for dinner with his family -- and then they could watch "Jeopardy!" together.

(In fact, Trudeau had a state dinner at Rideau Hall on his schedule, for the visiting president of Croatia.)

Trebek praised the geographical society for its work as a "cheerleader" for Canada.