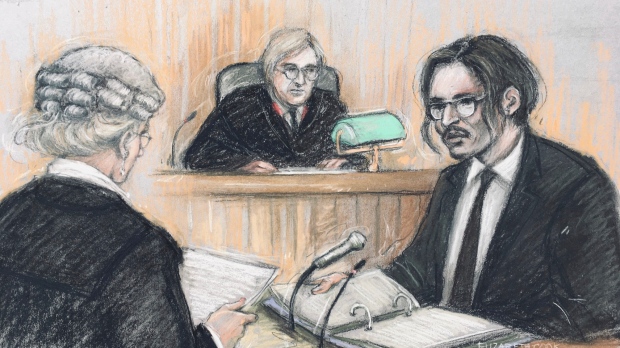 Court artist sketch by Elizabeth Cook, showing actor Johnny Depp, right, being cross-examined by Sasha Wass QC, left, before the judge, Justice Nicol, at the High Court in London, Tuesday July 7, 2020. The libel case by Depp against a British tabloid newspaper started Tuesday over a 2018 article that branded him violent and abusive to then-wife Amber Heard. Depp strongly denies the claim. (Elizabeth Cook/PA via AP)

LONDON - Johnny Depp testified today that his ex-wife Amber Heard had made "sick" claims of abuse and falsely branded him a monster.

The actor has taken the stand in a U-K libel case that hinges on who was the aggressor in the celebrity couple's violent, toxic relationship

The "Pirates of the Caribbean" star strongly denies Heard's claims that he assaulted her during their tempestuous marriage, and sued The Sun's publisher, News Group Newspapers, and its executive editor, Dan Wootton.

In a written witness statement, Depp maintained "these sick claims are totally untrue," adding that Heard's allegations hurt his career and had "been a constant issue in my casting."

A three-week trial over his libel claims opened today.

The trial is one of the first to be held in person since Britain began to lift its coronavirus lockdown.

They divorced in 2017, and now bitterly accuse one another of abuse.

Depp and Heard arrived by separate entrances at the neo-Gothic court building.

Both wore face coverings over their noses and mouths as they arrived.

Proceedings have been spread over several courtrooms to allow for social distancing.