CBC temporarily scraps local TV newscasts, except for the North, due to COVID-19 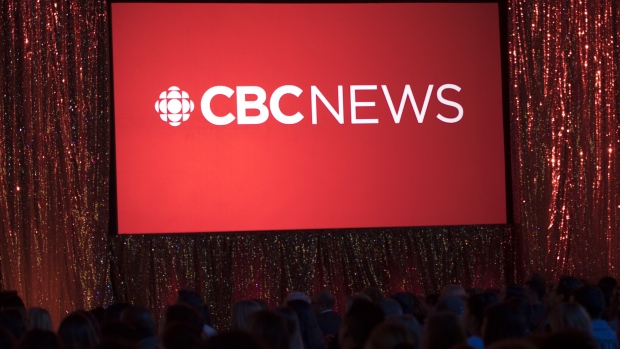 The CBC News logo is projected onto a screen during the CBC's annual upfront presentation at The Mattamy Athletic Centre in Toronto, Wednesday, May 29, 2019. The CBC is temporarily scrapping most of its local TV newscasts in response to the evolving COVID-19 crisis and putting the focus on coverage at CBC News Network. THE CANADIAN PRESS/Tijana Martin

TORONTO - The CBC temporarily scrapped most of its local TV newscasts to consolidate resources at CBC News Network amid the COVID-19 crisis on Wednesday - a move the premier of Prince Edward Island said should be reversed to keep remote and vulnerable communities informed during the pandemic.

The public broadcaster said starting Wednesday, it won't be airing local TV newscasts across the country, with the exception of CBC North.

A statement said CBC News Network will instead be the “core live breaking-news service” and replace all the other local supper-hour and late-night newscasts across the country on CBC and CBC Gem.

Local coverage will continue on radio, digital and social media.

CBC North, which covers Yukon, Northwest Territories, Nunavut, and Northern Quebec, will continue to broadcast “Northbeat” from Yellowknife and “Igalaaq” from Iqaluit in the Inuktitut language.

The CBC is also temporarily suspending its “Power & Politics” program so the Ottawa production team can be redeployed to CBC News Network.

“As Canadians turn to us for the latest developments during these unprecedented times, we are temporarily pooling our resources into one core news offering,” Susan Marjetti, general manager of CBC news, current affairs and local, said in the statement.

“We are needed now more than ever, and will work together across the organization to serve Canadians night and day with the trusted news and critical information they need for the duration of the pandemic, while keeping our teams safe. Simply stated, extraordinary times require extraordinary measures.”

“With the health and safety of Islanders at the forefront, it is vital that we continue to share the latest information with Islanders in real time,” King said in a statement.

“It is my opinion that now is not the time for the CBC to suspend its local news programming.”

King added that access to the internet across the largely rural province is not always reliable.

“Many Island seniors do not use the internet, have social media or pay attention to digital news platforms,” King said.

“They are our most vulnerable Islanders and need the most up-to-date information to properly protect themselves from COVID-19.”

“The reach of 'CBC News: Compass' into the living rooms of Island households, community and long-term care homes and seniors' residences is essential now, more than ever,” King said.

“Our chief public health officer and government are working together to share important information, recommendations and directions for Islanders as we navigate the current state of public health emergency in our province and 'CBC News: Compass' is a critical partner in helping us do this.”

King said he spoke with Catherine Tait, president and CEO of CBC, to express his disappointment. He said she told him the changes would not be reconsidered at this time.

“This was not an easy decision for us to make but given these unprecedented times, this shift will ensure we provide Canadians with the best possible news coverage while keeping our journalists safe and healthy,” he said.

A memo to CBC staff Wednesday noted these “unprecedented times” have led to “much stricter newsgathering protocols,” and that there are far fewer staff in CBC's Toronto broadcast centre.

It said CBC News is also limiting guest interaction with broadcast programs to telephone, Skype or designated areas outside its newsrooms.

He noted that Italy, which is the epicentre of the COVID-19 pandemic in Europe, still has its newsstands open and the Italian government “has realized that in this great time of uncertainty, information is an essential resource - quality, local information.”

“We still don't know exactly why the CBC has made this decision but I think it's important that we do everything we can to get these services back online,” Bernhard said.

“It's essential for people to know what's going on where they live so they can take appropriate precautions.”

King said his government is willing to work with the local CBC station and national leadership “to ensure continuity of the local CBC television news program” in his province.

“If we are going to get through this pandemic situation, we need to do so together and by leveraging all of the resources we have. Now is not the time to scale back.”