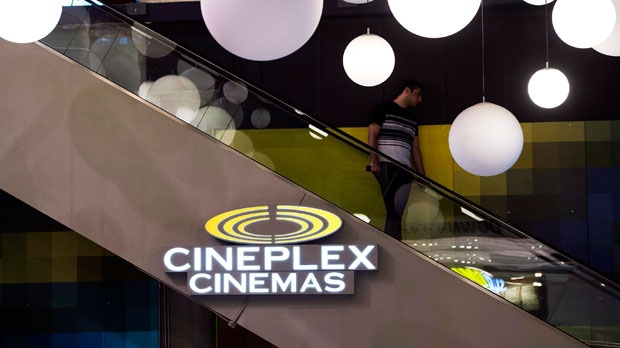 A man makes his way down an escalator during the Cineplex Entertainment company's annual general meeting in Toronto on Wednesday, May 17, 2017. THE CANADIAN PRESS/Nathan Denette

TORONTO -- A helping hand from the Avengers, Incredibles and Deadpool resulted in record revenue for Cineplex Inc. in the second quarter.

The Toronto-based entertainment giant said sequels to the superhero hits delivered increasing audience numbers and money spent at concession stands, bringing the company's revenues to an all-time high of $409.1 million for the quarter ended June 30, up about 12 per cent from the year before when it made $364.1 million.

The company's net income also jumped significantly, increasing 1,670 per cent to $24.4 million, or 38 cents a share this quarter from $1.4 million or 2 cents last year. Analysts had estimated $414 million of revenue and 24 cents per share of net income, according to Thomson Reuters Eikon.

Ellis Jacob, the president and chief executive officer of Cineplex, said there wasn't a single factor that prompted the strong performance.

"We had a lot of stars aligning," he said. "The box office did well (and) the food side of the business did extremely well with a significant increase in our concession revenues per patron."

The only "blemish," he said, was that the company's revenues were slightly lower than it expected for its Rec Room gaming restaurants, which brought in $15.7 million in revenue in the quarter.

His comments came as Cineplex has been focused on minimizing the unpredictability of the box office and competing with the popularity of on-demand streaming services by putting attention on its signage business and expanding gaming and restaurant brands it operates, including the Rec Room, Playdium and forthcoming virtual sports complexes Topgolf.

There will be nine Rec Rooms and two Playdiums open by the end of 2019 and that an announcement around Topgolf's first site is coming soon, he said.

Cineplex is also looking at food as a way to nab more customers. In June, Cineplex partnered with Uber Eats to launch a popcorn and snack delivery program in 60 communities throughout Ontario, Alberta, B.C. and Quebec. It has also toyed with expanding concession stand offerings and alcohol in some markets.

On Friday, Cineplex reported that concession revenue per patron rose 9.3 per cent to $6.59.

The company's third quarter has already generated positive expectations because of the debut of "Mamma Mia! Here We Go Again," "Ant-Man and the Wasp," "Mission: Impossible - Fallout" and soon-to-be-released "Crazy Rich Asians."

In the fourth quarter, theatregoers will be treated to the long-awaited "Mary Poppins Returns," "Spider-Man: Into the Spider-Verse," "Fantastic Beasts: The Crimes of Grindelwald Widows," "Dr. Seuss' The Grinch," and "The Nutcracker and the Four Realms."

Jacob said he was optimistic about how theatres will fare given the slate, but is always cautious around expecting specific films to be a hit and reap big profits.

"I have been in the business for 35 years and you can never tell what the guest is going to do," he said.

"I always go back to when a movie called 'Home Alone' was coming out and we all watched the movie with the senior management team and we all said, "Oh God, here is another movie that is not going to deliver,' and the thing hit records. You never know in our business."

That element of surprise cropped up at Cineplex in areas other than the film business this quarter. The company unexpectedly had to grapple with weaker audiences because of weather in Edmonton and a fire at its Seton location in Alberta, causing a $3.7 million interruption in business insurance proceeds.

Cineplex, which announced in April that it would lay off "a number of" full-time workers to eliminate duplicate roles following several business acquisitions, said it also implemented a cost-reduction program with the expectation that it will bring $25 million in annualized cost savings by the end of the year.