Gordon Lightfoot on starring in a 'legacy' documentary about himself 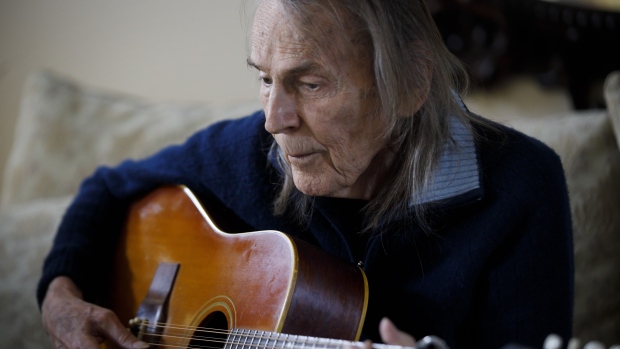 TORONTO -- Gordon Lightfoot didn't need much convincing when filmmakers approached him about a documentary on his prolific music career.

The iconic Canadian folk singer-songwriter figured their timing probably couldn't be any better.

"I'm still walking around," the 80-year-old performer says matter of factly, with a smirk, as he sits between the two documentarians in his Toronto living room.

And the way Lightfoot tells it, that's how "Gordon Lightfoot: If You Could Read My Mind" came to be -- though its filmmakers Martha Kehoe and Joan Tosoni, who spent eight years trying to make the documentary happen, tell a different story.

The pair were locked into sanding Lightfoot's career down to a tight 90 minutes, leaving scant room for his childhood, rise to fame, struggles with alcohol, tabloid relationships -- oh, and his colossal influence on a generation of musicians.

"We struggled with it, and we knew we would," Kehoe says.

"You can't make the definitive film about somebody like this. Someone could always come along and do a different film... and you know, we had the feeling that we're women, we're the age we are... we know Gord... We felt we could just make the movie that we would make."

When the documentary opens across Canada in the coming weeks, Lightfoot's fans will certainly have strong opinions about what made the cut and what didn't.

The musician's children are virtually left out of the picture, while the abdominal aortic aneurysm that nearly killed him in 2002 goes unmentioned. But the film uncovers other aspects of the musician that he usually keeps reserved.

It opens with Lightfoot throwing criticism at his early song "For Lovin' Me," a philandering anthem covered by Johnny Cash, Bob Dylan and others, that he now considers tactless and unacceptable for his concert set lists.

Later, a slightly agitated Lightfoot spills the beans on "The Circle is Small," a song he acknowledges is inspired by the "apartment hopping" he participated in while having affairs with women during the 1970s in downtown Toronto.

"I didn't have to tell them everything," Lightfoot says of the stories he shared with the filmmakers. "I mean, you've gotta put enough in there to at least make it interesting."

It's those "golden nuggets" Kehoe says were difficult to pry out of Lightfoot, who saves his deepest revelations for his music. After Lightfoot leaves the room for another interview, she explains how intensely private he could be during interviews.

"He would say, 'I don't even know why I'm doing this film.' And I said, 'Gord, it's not really for you, unfortunately,"' she adds.

"I had said to him, 'We really need you to be honest with us. This is your legacy project."'

Lightfoot understandably doesn't spend much time dwelling on the bigger questions of his legacy, possibly because in many ways he's still building it each day. He's in the midst of a U.S. tour that runs until late June.

After that, he'll put the finishing touches on his first album in 15 years. Much of the material was created by Lightfoot in late 2001 and early 2002 before he suffered health setbacks that complicated the release of his 2004 album "Harmony."

He largely swore off writing new material in the years that followed, though Lightfoot says rediscovering "half a dozen songs" while cleaning out his office gave him new inspiration. He's confident the album will be released by early next year.

"When I was younger, I always felt that I was really not ready for prime time," Lightfoot says.

His perspective has changed in recent years, he adds, and "everything is just up." He's pleased with his band's live performances, and as he sees it, their comradery on the stage is inspiring.

"We're all sports-minded," he said. "We're like a team trying to improve itself more."