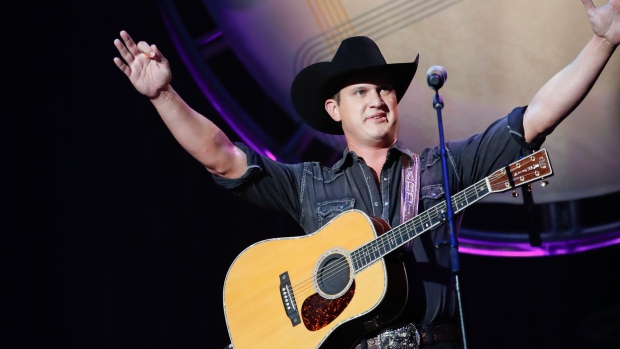 NASHVILLE -- Country traditionalist Jon Pardi is kicking off his third album just the way he likes his country music -- with a fiddle intro. Pardi, whose 2016 album, "California Sunrise," shot him to the top of the country album chart, is releasing "Heartache Medication" on June 3, a classic honky-tonk-style song that's the first single from an album of the same name to be released Sept. 27.

"When I wrote that song, I knew the fiddle was going to count it off and we're going to have a fiddle intro," the 34-year-old Pardi told The Associated Press.

"The first fiddle intro ever on country radio since Alan Jackson," he said with a laugh.

"Heartache Medication" is also the name of a headlining tour he'll kick off Oct. 1 and 2 at the Ryman Auditorium, the Mother Church of Country Music.

Pardi, a California native, won best new artist at the Country Music Association Awards in 2017 due to songs like "Dirt on My Boots" and "Head Over Boots," both multi-platinum singles.

Co-written with Natalie Hemby and Barry Dean, "Heartache Medication" is a drinking-to-forget song, with plenty of fiddles, twangy Bakersfield-style guitars and swinging pedal steel. But Pardi keeps the tempo up with a rocking backbeat, because even when he's singing sad songs, he wants people to have a good time.

"There's a lot of songs and subjects that this album talks about, and it could be sad like a loss, or just kind of down, but the songs lift you up. They put you in a higher place," Pardi said.

Pardi co-produced this album with Bart Butler, as he has for his last two albums. Although he sticks to traditional country instruments, he's not opposed to dabbling in pop production elements that have dominated country radio for a decade, as he did on "California Sunrise" and again, sparingly, on "Heartache Medication."

"It's not a bad thing to mix that in and have fun with it, but not depend on it, like this is going to make the song," Pardi said.

In addition to his own new music, he's got a duet with Thomas Rhett, one of country music's most progressive pop country artists, on Rhett's upcoming album "Center Point Road" on a song called "Beer Can't Fix," co-written in part by OneRepublic's Ryan Tedder.

Pardi has been learning a lot as a perennial opener on Dierks Bentley's arena tours for a couple of years now, as well as opening for Miranda Lambert last year and headlining a CMT tour. But he's ready to take control of producing a full headlining show, especially at some historic country music venues.

"To have a true hometown Nashville show at the Ryman, that's what it's all about," Pardi said.

He's going from opening for Dwight Yoakam at Floore's Country Store, a revered honky-tonk in Helotes, Texas, that Willie Nelson put on the map, to headlining the venue this year.

"The timing is perfect," Pardi said. "We've been on tour all the time, playing opening acts. And I know the fans are ready."