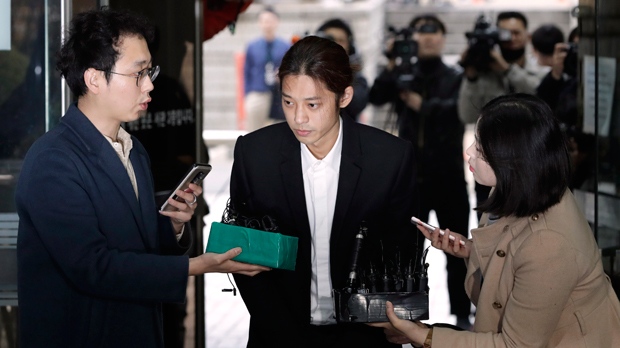 K-pop singer Jung Joon-young is questioned by reporters upon his arrival to attend a hearing at the Seoul Central District Court in Seoul, South Korea, Thursday, March 21, 2019. A South Korean pop star has appeared at a court hearing to decide whether to arrest him over allegations that he illegally shared sexually explicit videos of women taken without their knowledge or consent in online group chats. (AP Photo/Lee Jin-man)

The Seoul Central District Court issued an arrest warrant for Jung hours after he appeared at a hearing and apologized to the victims and to “everyone who has showed affection for me.” He was later escorted to a police station in downtown Seoul in handcuffs.

People involved in scandals in South Korea often issue public apologies even as they maintain their innocence.

Jung was first questioned by police last week about allegations that he secretly filmed his sexual encounters and shared them in private group chats with his friends.

Police are also investigating another K-pop star, Seungri, who soared to international stardom as a member of the group Big Bang, over suspicions that he attempted to arrange unlawful sexual services for his business investors.

The Seoul Metropolitan Police Agency requested an arrest warrant for Jung on Monday through state prosecutors. The scandal has caused an uproar in South Korea, where women are increasingly speaking out against what they describe as a culture of misogyny with the rampant spread of intimate photos and videos taken by hidden cameras, which they say have women living in constant anxiety and distress.