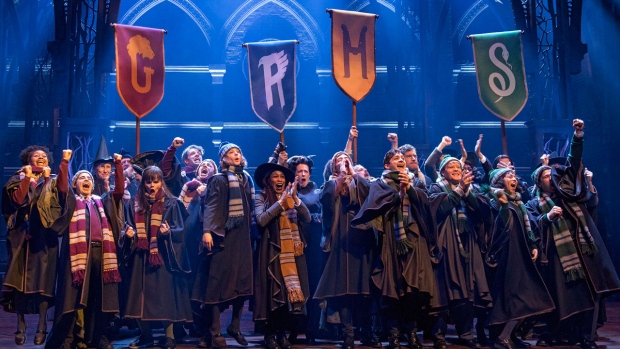 The Broadway cast of Harry Potter and the Cursed Child is shown in a handout photo. THE CANADIAN PRESS/HO-Mirvish Productions-Matthew Murphy MANDATORY CREDIT

TORONTO -- The witches and wizards of "Harry Potter and the Cursed Child" are bringing their magic to a Toronto stage.

Mirvish Productions says the Tony award-winning show will make its Canadian premiere in fall 2020 at the Ed Mirvish Theatre.

Exact dates and ticket information have yet to be announced.

The two-part play comes from playwright Jack Thorne, based on an original new story by Thorne, series creator J.K. Rowling and John Tiffany.

The stage sequel to Rowling's books follows a grown-up Harry Potter and his youngest son, Albus, who wrestles with living in his father's shadow at the Hogwarts School of Witchcraft and Wizardry.

The play premiered in London in 2016 before heading to Broadway last year, racking up box-office success and awards that include six Tonys.