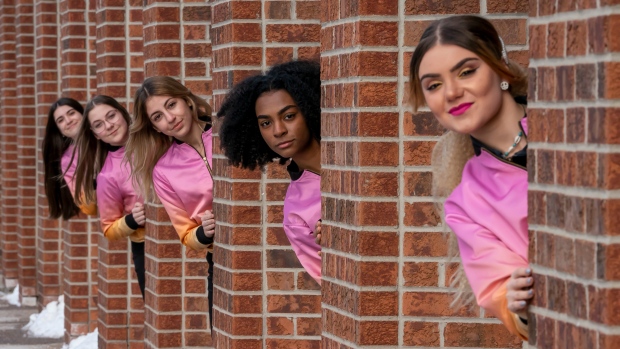 Girl Pow-r pose for a photo in Mississauga, Ont. on Saturday, February 29, 2020. Several weeks after teenage pop group Girl Pow-r learned they were nominated for their first Juno award, they're still reliving the thrill of the moment. THE CANADIAN PRESS/Frank Gunn

TORONTO -- Several weeks after teenage pop group Girl Pow-r learned they were nominated for their first Juno award, they're still reliving the thrill of the moment.

Dressed in matching pink and orange jackets, the group was huddled together at a Toronto television studio in late January for the splashy reveal of who was contending for trophies at the country's biggest celebration of Canadian music.

Hundreds of other musicians and industry players were also in the room to see who'd be heading to Saskatoon for the big show.

Girl Pow-r had a hunch they might be among the nominees for children's album of the year -- they were invited to the event after all -- but nothing was certain until their name flashed on the screen.

"It was like a scene out of a movie," recalls Kalista Wilson, a 15-year-old member of the group.

"You could hear a pin drop almost -- at least in my mind. My heart was pounding. And then we heard our name."

The girls let out an elated scream that turned heads across the room.

A few minutes later, Juno Awards host Alessia Cara was so captivated by the girls' energy that she paused a red carpet interview to watch them perform an impromptu a cappella, to a joyous round of applause.

There was something about Girl Pow-r that was catching on fast.

As the Junos near, the group recently gathered at a rehearsal space on the outskirts of Toronto to make final preparations for the biggest spotlight of their lives in the Prairie city. In preparing for the week of Juno-related events, they're focused on nailing their dance moves and running through several songs with their musical instruments.

It's easy to see the appeal of the fresh-faced youngsters who aim to inspire confidence and encourage young people to consider the world beyond themselves.

Their six-track debut album "This Is Us" is stacked with pop-rock songs that evoke the heyday of early 2000s pop hits. "Never Let Go" pulls from Hilary Duff favourites while "Stronger Than Yesterday" leans heavily on the self-assuredness that helped Kelly Clarkson win hearts. There's also a dash of S Club 7's carefree spirit and the punchy rebel youth of Avril Lavigne.

But the six-member group say they have greater ambitions than just being singers.

Each girl has taken on a social cause, ranging from mental health support to equality for girls, and youth homelessness. They represent each one in their music video "This Is Us," and on social media, in hopes of encouraging others to take a similar lead in their own communities, and inspire more positivity.

"I feel like there's a lack of it in the music industry right now, there's not a lot of songs that promote good things," said Carina Bianchini, who's 17.

"There's not necessarily negativity, but (most music is) not about something I feel would be good for changing the world for the younger generation."

Among their achievements, Girl Pow-r is already part of Junos history.

This marks the first year teenagers and pre-teens are nominated in the children's album category, perhaps a sign Juno voters are thinking beyond the traditional confines of the genre, which celebrated kids shows, lullabies or performers who taught the ABCs.

What makes Girl Pow-r unique is they speak to a young generation that's socially activated.

Social movements like these played a role in the concept behind Girl Pow-r. The group's creator Dawn Van Dam launched the idea after her daughter abandoned a number of tracks she was working on for her own album, deciding that she'd outgrown them as an artist. Those leftover songs, which include anti-bullying track "Krisi," became the foundation of the new girl group.

Van Dam announced plans to hold auditions timed for International Women's Day in 2017, likening to the process to playing the role of TV judge Simon Cowell, but with a focus on the spirit of "girl power."

"People would say to me, 'Oh that's a stupid name because it's sort of generic,' but you get it automatically what Girl Pow-r is about."

The call-out attracted young women from across Ontario, some who either saw postings online or were ushered into the room by their agent.

The final six come from different parts of the province, but they gather nearly every weekend at the Mississauga, Ont., rehearsal space to hone their stage presence and interact with fans live on Instagram.

Van Dam, who's held leadership roles at a number of major Canadian companies, was the one who encouraged each girl to choose their own social cause, write a speech, and speak about the issue in public whenever the opportunity arose.

When the concept began picking up momentum, the girls started booking shows everywhere from elementary schools to community rib fests. After each performance, they'd gather near the stage to interact with young concertgoers about their message.

Since its launch, Van Dam has grown Girl Pow-r beyond its original six to include a support team of other girls who aspire to become part of the main group. She likens it to a varsity team, with the newer recruits stepping onto the main stage when the other girls can't make a show.

With the group now a major awards contender, Van Dam wants to capitalize on the attention and positive feedback.

"Some of the parents will come to me saying, 'Before my daughter joined Girl Pow-r she'd stand in the corner and not talk to anyone. She was too shy. Now anybody walks up to her, she'll talk to them (about) anything.' And that's a huge gift to be able to give someone," she said.

"I can't stop because what I see that we've created, and what I've seen it does for these girls, I actually want to spread it around the world."