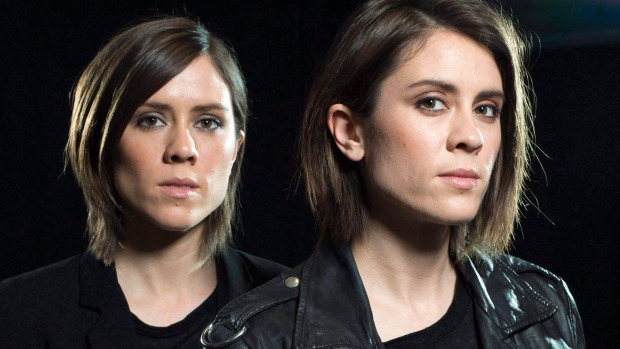 TORONTO - Tegan and Sara were coming off a stunning run of mainstream success when they found themselves in a creative rut.

They'd performed at the 2015 Oscars, become advocates for LGBTQ causes, and released two radio-friendly pop albums, but two years ago the identical twins were at a standstill over their next stage, even flirting with the idea of experimenting in an entirely new genre.

“At the end of our last album cycle I didn't know what we would do,” Sara Quin explained in a recent interview.

“Not even saying this to be funny, I was like: Do we go to Nashville and make a country record?”

It wouldn't have been a total stretch for the Calgary-raised pair to don cowboy boots and lean back in a pickup truck - challenging the genre with a queer perspective. They'd already proven themselves as chameleons by working the trenches of the male-dominated indie alternative scene in their twenties, before climbing the Top 40 charts with “Closer” and “Boyfriend” in their thirties.

Except now, at 39, the sisters were seeking a creative project that would make them “uncomfortable.” No shade to country music, but rhinestone jackets weren't the perfect fit.

Instead, they went back to their yearbooks for an exercise in nostalgia for a greater purpose - a new memoir.

“High School,” which recently hit book stores, is a queer coming-of-age story. It takes place during Tegan and Sara's formative academic and musical years in high school, reflecting on how they grew up gay, even when they didn't necessarily recognize it themselves.

The book arrives as Tegan and Sara release “Hey, I'm Just Like You,” an album of re-recorded songs based on demos they wrote as teenagers. They've embarked on a North American acoustic tour built around sharing memories and music, while setting the record straight on their lives.

“Everything about us is kind of misunderstood,” Tegan said.

“Like, people think we came out to each other... and that we must be best friends. There's so many moments over the last 20 years where I've been like, 'Really? That's what you thought?”'

Back in the '90s, Tegan and Sara were simply trying to figure themselves out, while experimenting with drugs, songwriting, and independence from their parents.

Coming out can be a messy process, and in Tegan and Sara's case it's complicated by the drama of friendships, harnessing their first guitars, and mundane part-time jobs.

Each chapter in “High School” is written by either Tegan or Sara from a first-person perspective as they move towards the graduation finish line.

“Those things that happened to us in our younger years really informed the people we became,” Tegan said.

“In the process of writing the book, I feel we uncovered another part of us as creators.”-

“High School” spends ample time recalling their happiest moments, but they don't mince words on the ugliness of their coming out experiences either, a process that was especially difficult for Sara.

“I hated myself,” she recalled. “(I) was someone who was both queer and having a gay relationship, but also totally homophobic, like internally homophobic.”

Late in the book, Sara's emotional struggle with her identity boils over during a Grade 12 sex education class when an ignorant classmate spits an offensive slur, saying only gay people “get AIDS.” Frustrated by her teacher's lack of disciplinary action for the comments, Sara picks up her desk chair and hurls it at the student before running from the classroom in tears.

The pivotal moment sheds light on the conviction both sisters have taken to heart in their fight for LGBTQ causes. Three years ago, they created a foundation to raise money for queer issues and organizations in an effort to empower LGBTQ girls and women.

Sara's experience also raises questions about how she continues to grapple with her adolescence as an adult.

“It was hard, I was traumatized,” she said. “And that has carried over to my adult life.”

Queer people tend to dismiss these lingering feelings from their past, she said, and internalized homophobia that goes unaddressed creates divisions within the community, and even in romantic relationships.

“I don't want to hold my girlfriend's hand on the street because I'm afraid of people staring at us,” Sara said.

“I worry about being discriminated against.”

Tegan and Sara say they hope putting their experiences to paper gives their young fans a reference point and legitimacy.

“Now that I've been refamiliarized with my young self, I can kind of understand why our audience says those things... (I can respond by saying) thank you for letting me create this community with you because it saved me as much as it saved them.”