Jaffer, husband of federal Tory cabinet minister Helena Guergis, was arrested in the wee hours of Friday morning by Ontario Provincial Police in the village of Palgrave, north of Toronto.

Police report that the officer, who stopped a speeding SUV at about 12:45 a.m., could smell alcohol.

Jaffer has been charged with driving while over the legal blood-alcohol limit, and with possession of cocaine.

His licence has been suspended for 90 days and he is to appear in court in Orangeville, Ont., on Oct. 19.

Neither Jaffer nor Guergis, a junior minister responsible for women's issues, could be immediately reached for comment.

Jaffer, 37, was MP for the riding of Edmonton--Strathcona from 1997 until a surprise defeat in last year's election.

The spots said, in part: "Edmontonians understand how difficult it is to make sure our children make the right choices, especially on serious issues like drug use. The Conservative Party supports drug-free schools and getting tough with drug dealers who sell illegal drugs to children. Don't let our schools go up in smoke. On October 14th vote Conservative."

Jaffer was born in Kampala, Uganda, and immigrated to Edmonton with his family as a boy to escape persecution under the iron-fist rule of Idi Amin.

He was just 25 when he first arrived in Parliament as an MP.

Jaffer offered an emotional apology in the House of Commons in 2001 after one of his aides, Matthew Johnston, was caught impersonating him on a radio show while Jaffer was busy elsewhere.

After several months in the political wood shed, Jaffer was re-elected in 2006 and named Conservative caucus chairman by Prime Minister Stephen Harper.

Jaffer was staying in Angus, Ont., in his wife's southern Ontario riding of Simcoe--Grey when his vehicle was pulled over.

He was a fun-loving, gregarious MP, popular on the Ottawa party scene before romance blossomed with Guergis. They were married last Oct. 15 -- one day after the federal election.

Jaffer took his defeat at the hands of NDP rival Linda Duncan hard. Hers is the only seat in Tory-blue Alberta not held by the federal Conservatives. 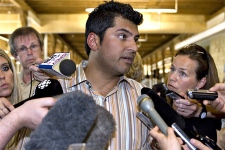 MP Rahim Jaffer, the national caucus chairman reacts to the eviction of journalists by plain-clothes RCMP officers from the lobby of the Charlottetown hotel where the federal Conservative caucus is holding its annual meeting. (CP / Jacques Boissinot)