There's good news for some downtown businesses affected by the G20 weekend with the federal government expanding the compensation zone for those that lost revenue.

Previously, only businesses within the security perimeter could claim compensation. Now, Ottawa has designated a larger "External Affected Area" of businesses that will receive money, the Globe and Mail reports.

The area includes businesses on Queen Street West, Bay Street and near Queen's Park among others, according to the newspaper.

However, the compensation won't cover vandalism. The report says it's only for lost revenue due to security measures, protests and the difficulty of getting into the downtown core.

Some say expanding the compensation zone is not good enough and other areas need to be compensated as well.

Businesses not included in the expanded area can still file claims, but there's no guarantee they will be compensated.

Affected businesses have until Nove. 17 to make a claim. 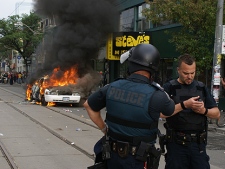 A police car burns in this file photo.