TORONTO - The hefty cost and steep learning curve to make a movie in 3D isn't stopping low-budget Canadian filmmakers April Mullen and Tim Doiron from diving into the technology.

They admit that 3D is best known for adding extra punch to gargantuan-sized spectacles like this summer's "Transformers: Dark of the Moon," "Green Lantern," and "Harry Potter and the Deathly Hallows: Part 2."

But the thrifty duo say the eye-popping effects can have just as much impact in their modest horror-comedy, "Dead Before Dawn," currently filming in Niagara Falls, Ont.

"We've always wanted to bring it to a lower-budget film and so we just started researching it and have been working our butts off to try and make it a reality," Doiron says during a break from filming at a cemetery.

"We've both been really excited by 3D and we started learning about well over a year ago.... We were just so excited by how it changes the storytelling and everything about filmmaking."

"Dead Before Dawn" is being billed as the "first 100 per cent Canadian 3D live-action feature." Cult horror fans may recall 1961's "The Mask," but a publicist notes that film involved U.S. funds.

With a budget just north of $1 million and a shooting schedule just 20 days long, it's also been one of the most challenging projects for longtime collaborators Mullen and Doiron, who graduated from Ryerson University's acting program in 2004.

Their previous indie features are the goofy mockumentary "Rock Paper Scissors: The Way of the Tosser" and their homage to '70s pulp "GravyTrain."

Their new venture marks a bid for a mainstream audience, with "Diary of a Wimpy Kid" star Devon Bostick helming an ensemble cast in his role as Casper Galloway, a college kid who unwittingly unleashes a demon curse with his school pals.

"We were trying to think of what best would utilize everything we've learned up to this point and what would be a really great launching pad for us to go from sort of an indie market more into the mainstream market," says Doiron, who penned the script and appears onscreen as one of Casper's friends.

"We really like the genre feel of things anyway and we really like doing out-of-the-box marketing with our films and we like comedy, so, that all sort of sparked our brains."

Studding the cast with names was a calculated plan, too, adds Mullen, who directs, produces and also appears in the film.

"Back To the Future" star Christopher Lloyd turns up as Casper's grandfather, Gramps. He runs the occult shop where a mystical urn is accidentally broken, causing people to kill themselves and turn into zombie demons, known here as zemons.

Kids and the Hall comic Kevin McDonald beefs up the laugh factor with a cameo as Casper's nagging professor. Other co-stars include Brandon Jay McLaren ("The Killing") and Rossif Sutherland ("High Life").

"Without (stars) we can't swim into the theatres so Tim and I we would sort of wait out, wait out, and wait out until we got the people that we need in order for the film to succeed," says Mullen.

Mullen says 3D gimmicks like flying limbs and splattering blood will be sparingly used, noting she's focusing instead on building a visual depth to the screen that gives audiences an immersive experience.

"I think for a smaller feature we had to be really smart and tactical about the use of 3D and really make it something new because there's never been a low-budget 3D feature really ever made for the amount of funding we have," says Mullen, who expects "Dead Before Dawn" to hit the festival circuit in early 2012 and get a theatrical release in September 2012.

The film's supporters are banking on 3D sticking around for a long time.

After a planned theatrical run, Mullen says "Dead Before Dawn" is slated to hit the small screen, thanks to a presale deal with Movie Central and The Movie Network.

"There will be 3D channels by that time, for sure," says Mullen. 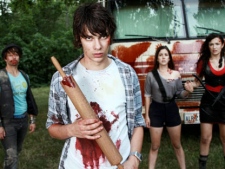 Tim Doiron, left to right, Devon Bostick, Martha McIsaac, April Mullen, are shown in this handout photo from the film "Dead Before Dawn". The hefty cost and steep learning curve of making a movie in 3D isn't stopping low-budget Canadian filmmakers April Mullen and Tim Doiron from diving into the technology. (THE CANADIAN PRESS/HO)