TORONTO - Police violated civil rights, detained people illegally and used excessive force during the G20 summit two years ago, a new report concludes, but some caught up in the police operation said there was still no real accountability for their mistreatment.

The report by Ontario's independent police watchdog also blasts the temporary detention centre set up by Toronto police for its poor planning, design and operation that saw people detained illegally.

The Office of the Independent Police Review Director found police breached several constitutional rights during the tumultuous event, in which more than 1,100 people were arrested, most to be released without charge.

"Some police officers ignored basic rights citizens have under the charter and overstepped their authority when they stopped and searched people arbitrarily and without legal justification," the review states.

The 300-page detailed look at the events that weekend finds that protesters were not the only ones who resorted to violence.

"Numerous police officers used excessive force when arresting individuals, and seemed to send a message that violence would be met with violence," the report states.

"The reaction created a cycle of escalating responses from both sides."

The report takes aim at police tactics at the provincial legislature, which had been set up in advance as a protest zone. The force used for crowd control and in making arrests was "in some cases excessive."

"It is fair to say the level of force used in controlling the crowds and making arrests at Queen's Park was higher than anything the general public had witnessed before in Toronto."

It also concludes mass arrests outside a downtown hotel were "unlawful," and a dawn raid and arrest of people at a university residence was done without the required warrants.

The office, under director Gerry McNeilly, slams police for "kettling" scores of people -- many passersby -- at a downtown intersection for several hours in a severe thunderstorm, calling it "unreasonable, unnecessary and unlawful."

Even officers in place thought the situation untenable, with one describing the incident commander as "maniacal," the report says.

"Where are they going to give them a chance to disperse?" one officer asked.

"They aren't, that's the problem," another replied.

In regard to the temporary detention centre, the report criticizes senior officers for failing to address problems.

Among complaints were overcrowding, lack of food and water or access to lawyers, the use of flex cuffs and strip searches. Detainees had to use toilets in full view of others and many were held illegally.

Among those were Tommy Taylor, who spent almost 24 hours in handcuffs, and his girlfriend, who had her bra seized as a possible weapon.

"The leadership of that weekend -- there are people who do not deserve to have their jobs any more," said Taylor, who was "scooped up" off the sidewalk, even though he wasn't part of the protest.

"Everyone keeps passing the buck."

Taylor said Canadians are good at telling others about civil rights and how to treat protesters.

"We get in other countries' faces about that," he said. "When it happens here, we're trying to sweep it under the carpet."

Because of shoddy paperwork, McNeilly said it was impossible to know exactly how many people were arrested over the summit weekend -- the largest mass arrest in Canadian history.

Among them, it urges that police be legally obliged to disclose potential evidence of officer wrongdoing.

"Senior officers especially should not condone or distance themselves from the misconduct of subordinates or colleagues."

It also urges governments to provide enough time for planning and preparing large-scale security operations, both of which were sorely lacking.

"The operational planning committee should be faulted for the decision that it would be 'business as usual."'

In all, the report slams Toronto police -- who had the lead in keeping order outside the summit security zone and ran the detention centre -- for poor planning and serious gaps in communications.

The incident command centre, set up for overall police control, had "no idea" how many officers were working. Police failed to give proper directions to disperse, leading to confrontations.

It also faults the incident commander for referring to the crowds at one point as "marauding terrorists" as he followed instructions from the city's now-retired deputy police chief to "take back the streets."

In response, Toronto police Chief Bill Blair was adamant he would offer no apologies -- despite a personal plea from Taylor to do so -- but said officers of all ranks would be held accountable for any proven wrongdoing.

About two dozen complaints forwarded by McNeilly would likely go to a police tribunal hearing, Blair said, adding most of the 19,000 officers on the streets that weekend acted "appropriately."

McNeilly's findings follow a report this week by the RCMP complaints commissioner that the Mounties had by and large acted reasonably.

The June 2010 summit was marred by vandals who smashed windows and set police cruisers on fire as well as by mass arrests, including those of innocent bystanders.

McNeilly said his arm's-length civilian agency received 356 complaints. The agency deemed 107 of them substantiated -- 96 were "serious."

Numerous individuals and groups, including the Canadian Civil Liberties Association, have lambasted police for riding roughshod over people's rights.

The association called on the Ontario government and police services to implement McNeilly's recommendations, issue an "unconditional" apology, and take disciplinary or criminal action against officers implicated in misconduct.

"Given the severity of the rights violations that occurred on the G20 weekend, full political and police accountability is vital to rebuilding public trust in law enforcement and democratic institutions," the association said.

Several civil suits alleging police brutality and rights violations have been launched against Toronto police and other agencies.

Earlier this year, McNeilly recommended charges against five police officers for the beating of G20 protester Adam Nobody at the legislature. 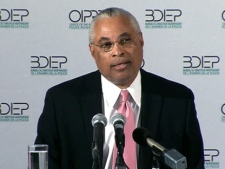 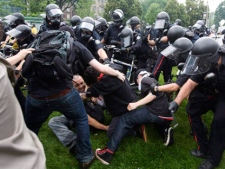 Police club a crowd of activists during the protest at the G20 Summit in Toronto Saturday, June 26, 2010. Ontario's Liberal government passed a secret law governing police powers during last year's G20 summit in Toronto that could have led to even more abuses than were witnessed, concludes former chief justice Roy McMurtry in a report released Thursday.(THE CANADIAN PRESS/Darren Calabrese)