BURLINGTON, Ont. - A convoy of giant beer vats headed for Toronto is struggling to reach its destination on time.

The convoy of about 40 vehicles was parked west of the city in Burlington this morning, less than two kilometres past the spot where it was scheduled to stop Saturday.

The six fermentation tanks -- each capable of holding 1.4 million bottles of beer -- are stopped for the day on Highway 5, between Brant Street and Eaglesfield Drive.

The convoy left the Port of Hamilton around 9 p.m. Friday and was meant to arrive at the Molson Coors brewery near Pearson airport by Tuesday morning.

It's unclear what is causing the setbacks and whether they will delay the convoy's arrival at the brewery.

The convoy is set to resume its journey tonight, heading east into Oakville and then north to Milton. 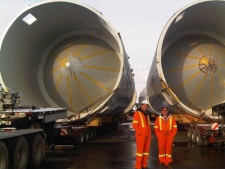 Giant beer vats are seen in Hamilton harbour before they are moved to a Molson Coors brewery in northwest Toronto on Friday, Jan. 7, 2010. (CTV News / Corey Baird)