Girl dies of injuries suffered in fire that killed mother

A three-year-old girl has died of injuries she suffered in a weekend fire that also killed her mother, Toronto police say.

The fire occurred at a low-rise apartment building at 150 Rosemount Ave., located in the Weston Road and Lawrence Avenue area, Saturday at about 11:40 p.m.

Heavy smoke and flames were pouring out of a fifth-floor suite when emergency crews arrived.

The woman, believed to be in her late 40s, was pronounced dead at the scene, while the girl was rushed to the Hospital for Sick Children in critical condition.

The Fire Marshal's Office is investigating the cause of the blaze. Damage is estimated at $100,000.

It's still not clear if the suite had a working smoke detector. 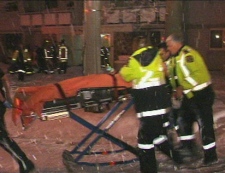 Emergency crews rush a child to hospital after she suffered life-threatening injuries in a fire on Saturday, Feb. 26, 2011.