The Conservative leader told a rally in Richmond Hill north of Toronto today that the choice in Monday's vote is between a Tory majority or an NDP-led government.

And he said he wants "traditional Liberals" to turn to him to keep Jack Layton's "extreme" agenda from wrecking the economic recovery.

"I think the vast majority of traditional Liberals don't support such a platform," he said.

"I encourage all voters who feel that way and many voters who would have traditionally supported the Liberal party to support a moderate mainstream platform for the economy."

The new tactic may be Harper's last chance to secure his first majority mandate as recent polls suggest the NDP is surging at the expense of the Bloc Quebecois in Quebec and the Liberals elsewhere in Canada.

The polls have also indicated the Tory vote has remained largely static in the mid-30s. But the new calculus on how opposition votes split still leaves the possibility that Harper can win a majority if he can siphon off some centrist Liberals who may be concerned with how the NDP would manage the economy.

Most of Harper's message today was an attempt to sow fear over how Layton would fare as prime minister, barely mentioning the Liberals or their leader Michael Ignatieff.

The NDP would raise taxes to pay for their $70 billion in spending promises, he said, and that would kill jobs and the recovery.

Meanwhile, Layton has spent the past couple of days assuring voters he would run a responsible government and fending off what he termed a "smear campaign" from a news organization with Conservative connections.

Sun TV reported Friday that Layton was found in a massage parlour during a police raid 15 years ago. The network said Layton was neither arrested nor charged during the 1996 incident. He was a Toronto city councillor at the time.

The television network is attributing the information to notes taken by police officers at the time.

The network reported Layton's wife Olivia Chow said she knew about the incident and that her husband merely wanted a massage.

"It's unfortunate to see the smear campaign starting in these last few days of the campaign," Layton responded. "Absolutely nothing wrong was done, there's no wrongdoing here, but the smears start."

The story was at best an unwelcome and embarrassing distraction to Layton's campaign, which had been riding an unexpected and to some, baffling, wave of success that has taken the party into second place in the national polls and within striking range of the Tories.

But with success has come increased scrutiny, and Layton was accused of making his first mistake with an offhand remark to Reuters that he hopes the Bank of Canada does not raise interest rates.

It was the sort of remark that would have gone unreported if uttered by the leader of a third, or fourth party. Coming from a politician with a shot at being leader of the Opposition in the next Parliament and even a chance of being prime minister, it drew fire.

Layton quickly cleared up any confusion, saying he supports the principle that the Bank of Canada sets monetary policy independent of political interference.

Meanwhile, the Liberals' Ignatieff headed into the final weekend not so much fighting for the top job, but fighting for his party's political life.

Even the Toronto Star, Canada's largest circulation daily newspaper and a supporter of the party more often than not, is now urging Canadians to vote for the New Democrats to stop Harper.

On Saturday, Ignatieff was trying to shore up his last bastion, hop-scotching through Oakville, Guelph, Mississauga and Brampton, Ont., where the Liberals were strong in the last Parliament and where the Tories would dearly love to make inroads.

The West was lost long ago, except for a seat here and there. Party fortunes in Quebec appear to have sagged well behind the galvanized New Democrats.

The NDP explosion appears to have left Ignatieff almost in denial. On Friday, he said voting for the NDP and candidates who vacation mid-election is like "taking a trip to Fantasy Island."

"Choose candidates who actually show up as opposed to disappeared to Las Vegas for three weeks. Let's be serious here, it's decision time. Stop fooling around."

On Saturday, he urged Canadians to ignore polls that suggest he has lost.

"We're going to get the vote out and everybody's going to be surprised Monday night," he said.

Bloc Quebecois Leader Gilles Duceppe, facing an astonishingly strong challenge from the NDP, is also desperate to hold his core support. He's warning that the NDP will always side with Canada, not Quebec. 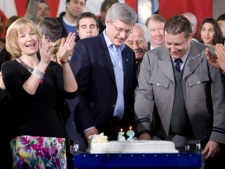 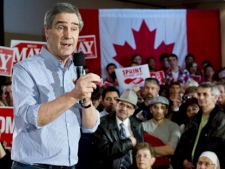