Former Maple Leaf Wade Belak has been found dead at a Toronto condominium.

A spokesperson with the Nashville Predators confirmed the death Wednesday night.

"The entire Nashville Predators organization and family is shocked and saddened by the sudden and untimely passing of Wade Belak," said the team's General Manager David Poile. "Wade was a beloved member of the organization, a terrific teammate and wonderful father and husband who will be greatly missed.

"Our thoughts and prayers go out to his wife Jennifer and children Andie and Alex," he continued. "We offer our full support to them at this very difficult time."

The former NHL-er retired from the Nashville Predators this past season and was set to star in the new season of CBC's "Battle of the Blades." He was also set to work as a broadcaster for the Predators this upcoming season.

The cause of death has not been released but emergency personnel at the scene tell CP24 no foul play was involved.

Emergency Medical Services told CP24 that a body was found at 1 King West -- a prestigious residence at the corner of King and Yonge Streets -- at around 1:30 p.m. EMS would not confirm the body as Belak's but said the man could not be revived and was pronounced at the scene.

"He was one of the best people I have met in the sport," said former Leaf Ian White. "He treated everyone with so much respect and he was always cracking jokes. He just brightened everyone's day at the rink."

Witnesses say the popular hockey player was with a friend and appeared in great spirits, taking photos with fans. Nothing seemed unusual, they said.

"He seemed in a great mood and I had to give him a jab about being on Battle of the Blades," said Troy Kahler, a casual aquaintance of Belak's who claims to have split a pitcher of beer with the former Leaf around 2 a.m. this morning. "He took it in stride. There was nothing out of the ordinary with him. He was smiling and just seemed to be regular old Wade."

"Hanging with my long lost brother @ToddSimpson27 in Toronto 8th addition for Battle of the Blades," he said.

Just before, he sent out another tweet complaining of aches after a hard workout:

Hayes then told CP24 in an interview that the station sent a cab to the King Street condo but Belak never came down.

A producer urged the taxi driver to stay at the residence and proceeded to call the athlete on his phone several times but to no avail. 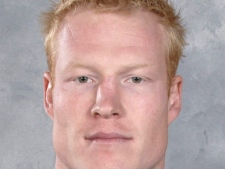 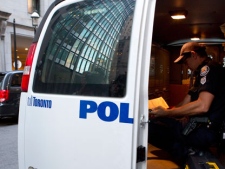 A police officer, from the Forensic Identification Service, sits in his van outside the 1 King West apartment in Toronto after former NHL player Wade Belak was found dead on Wednesday August 31, 2011. Former NHL tough guy Belak has been found dead in Toronto, the third NHL tough guy to die in 2011 and second in less than a month. THE CANADIAN PRESS/Chris Young