TORONTO - A lawyer for a man convicted of killing two women through the transmission of HIV says he is "seriously" considering an appeal.

A jury found Johnson Aziga, 52, guilty Saturday of two counts of first-degree murder for infecting two women to whom he did not disclose his HIV status.

He is believed to be the first person in Canada convicted of murder for lethally infecting partners with the virus that causes AIDS.

Munyonzwe Hamalengwa, one of Aziga's lawyers, says he believes the defence raised a "significant" reasonable doubt and they may appeal.

Hamalengwa says the verdict sets a bad precedent and will make people reconsider disclosing their HIV status to sexual partners. 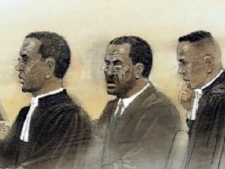 Johnson Aziga and his defence team are shown in this undated courtroom sketch.