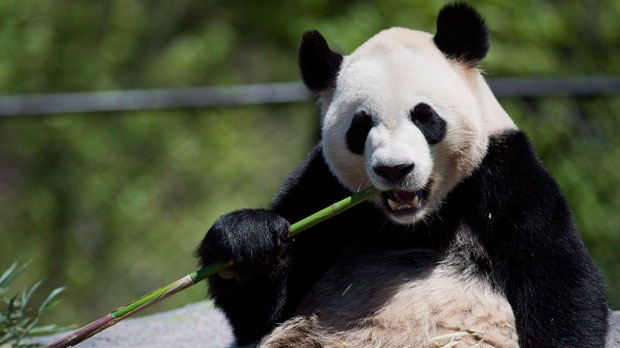 TORONTO -- The second half of a panda family's Canadian sojourn gets underway on Friday when the animals leave Toronto for a new home out west.

Two giant pandas on loan from China, plus the two babies they produced while living at the Toronto Zoo, will be relocating to Calgary where they will remain for as long as five years.

Da Mao and Er Shun, plus offspring Jia Panpan and Jia Yueyue, will be the first pandas to visit the city since the 1988 Olympics and will take up residence in a multimillion-dollar facility at the Calgary Zoo built expressly for their arrival.

The two panda parents were loaned to Canadian zoos for 10 years as part of a 2012 deal with China.

They have lived at the Toronto Zoo since 2013, where the cubs were born and later famously photographed in the arms of Prime Minister Justin Trudeau.

The cubs will head back to China after a year and a half in Calgary to be part of a breeding program, while the adults will stay on in Canada to try and become second-time parents.

Calgary Zoo spokeswoman Trish Exton-Parder says both the city and facility feel fortunate to play host to the four-legged diplomats.

Neither the Toronto nor Calgary zoo would offer any details about the pandas' planned journey, which is set to get underway on Friday morning.

Once they arrive in Calgary, however, Exton-Parder said the pandas would spend at least a month in quarantine.

That changes on May 7 when the zoo unveils both the animals and Panda Passage, their $14.5-million home for the duration of their stay.

Exton-Parder said the building that once housed Asian elephants has been renovated and redesigned with indoor and outdoor habitats for the panda family. Bamboo, the bears' primary food source, will be flown in so the animals can consume their requisite 40 kilograms a day, she said.

The zoo had previously estimated the price tag for the pandas' stay would reach $30 million once the cost of expanded parking, renovated washrooms and other guest facilities were included in the tally.

The zoo is hoping the pandas will attract an influx of visitors. Based on Toronto's experience, the organization has good reason for its optimism.

The Toronto Zoo reported a boost in visitors when the parental pandas arrived in 2013 and recorded another spike when the cubs were born in 2016.

It said 170,000 more people visited the facility that year compared to 2015, adding that 37.7 per cent of guests it surveyed said they were coming specifically to explore the panda exhibit.

Exton-Parder said it's hoped that some of the expected visitors will start thinking about animal conservation efforts, particularly for creatures closer to home that might be viewed as "less charismatic" than the teddy-bear-like pandas.

"We in Canada may sometimes forget about leopard frogs and Vancouver Island marmots and species that are disappearing," she said. "That's kind of a big job for (the pandas) too. With them being here and the conservation messages that they carry with them, it opens that door to inspire Canadians to pay a little more attention to their own backyard."

Once Da Mao and Er Shun's first pair of progeny have departed back to their ancestral homeland, Exton-Parder said the zoo will focus on seeing if it's possible to produce more panda cubs. Researchers will work with Er Shun's limited reproductive window, she said, and explore whether the giant panda might be able to conceive and give birth again.