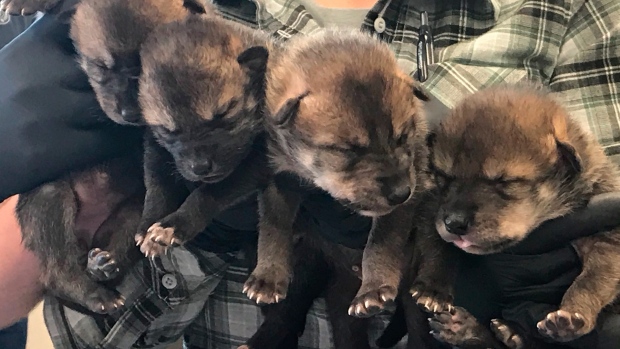 In this April 18, 2019 photo provided by the Endangered Wolf Center in Eureka, Mo.,, four of six Mexican wolves born recently in captivity are held at the center, after landing in Phoenix, Ariz., for relocation into the wild. (Endangered Wolf Center/ Rachel Crosby via AP)

ST. LOUIS - Missouri wildlife officials have placed six Mexican wolf pups born in captivity near St. Louis with two packs in the wild, in a new effort to repopulate the critically endangered species.

Three members of the Endangered Wolf Center in Eureka, Missouri, flew with the 11-day-old pups to Phoenix on April 18. From there, the pups were taken to packs in Arizona and New Mexico. Center officials say the placement increases the wild population and adds needed genetic diversity.

“It is literally vital for this particular population,” Regina Mossotti, director of animal care and conservation at the Endangered Wolf Center, said Thursday. “When you're talking about 150 animals left in the wild, genetics plays a crucial part in whether that recovery effort is successful or not.”

Mexican wolves once numbered in the hundreds of thousands in the Southwest. Hunting and habitat loss led to near-extinction, and the last seven remaining Mexican wolves were captured and taken to the Endangered Wolf Center in the 1970s in an effort to save the species.

The population slowly began to rebound. The first Mexican wolves were released back into the wild in 1998. The centre said the population in the wild has grown to around 150, with an estimated 131 of those in Arizona and New Mexico and the rest in Mexico.

The six pups - three male and three female - were among nine born at the centre on April 7 to parents Mack and Vera. Meanwhile, monitoring showed that several wild packs were having births at around the same time.

That was important because for wild wolf parents to accept pups born from outside the litter, the pups must be born at about the same time and must be placed before they are 14 days old, Mossotti said.

Getting the captive-born pups to their new homes was no easy task. After a commercial flight to Phoenix, Arizona Game and Fish provided a small plane that took Mossotti and colleagues to a mountainous area at the border of Arizona and New Mexico.

From there, the women hiked, carrying the potato-sized pups in pet carrier backpacks, to sites where U.S. Fish and Wildlife officials had located the dens.

One female pup was left with a pack in Arizona, which already had a seven-pup litter. The other five captivity-born pups were taken to a pack in New Mexico.

GPS collars attached to some of the wolves indicates that the wild mothers have taken to the new pups, Mossotti said, which didn't surprise her given the gentle, nurturing nature of the species.

“They get a bad rap,” Mossotti said. “We're used to seeing on TV the 'big bad wolf,' the big scary animal, which ironically is the opposite of what they are in real life.”

The New Mexico pack already had six pups. Experts didn't want to risk overburdening the mother so they brought three of the wild male pups back to the Endangered Wolf Center to be fostered by Vera and Mack and add to the captivity gene pool.

The Endangered Wolf Center was founded in 1971 by “Mutual of Omaha's Wild Kingdom” host Marlin Perkins and his wife, Carol. In addition to Mexican wolves, it works to preserve and protect red wolves and other wild canid species.