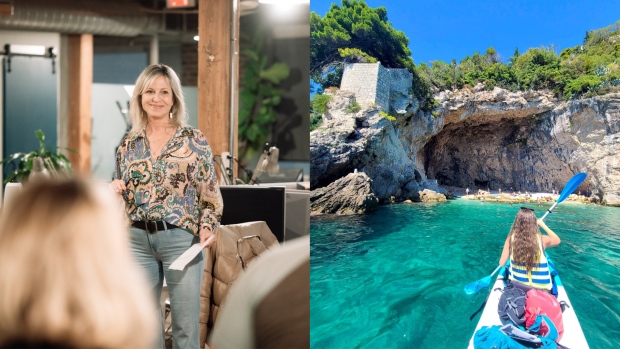 An image of Media Profile President, Alison King, and one of the company's employees on "workcation." (Media Profile/Alison King)

Employees at this Toronto-based company can work abroad for up to one month, and with some financial help from the company too.

Media Profile, a communications agency, gives all eligible employees the chance to work from anywhere in the world through its Work Away benefit, which covers up to $3,000 of their travel expenses – like accommodations and transportation – after tax.

How it works is employees who have been at the company for at least six months can work abroad for up to a month, as long as they continue to work in eastern time in their chosen spot.

President of Media Profile, Alison King, told CTV News Toronto that employees could also choose to tack on up to two weeks of vacation into their “Work Aways,” so they can be away for up to six weeks.

“I didn’t want to put a lot of fences around it, make a lot of rules and say you can only do this, and you can only spend the money on that,” King said over the phone Wednesday. “We trust you, you decide where, and when, and how you want to go.”

King says the idea came around during the height of the COVID-19 pandemic, when she noticed many employees were dealing with burnout.

“Everybody was kind of working from the same space, looking at the same window, and you could just see creativity seeping out and enthusiasm lagging, and I just thought, ‘What can we do that’s going to set us apart?’” she said.

The tough hiring market, coupled with finding a way to get people out of their space and away from the minutiae of everyday life during the pandemic, was what pushed King to come up with the Work Away benefit.

“Then I thought, ‘Okay, let’s get really crazy here,’ and not just say you can do it, but really encourage them to go by also helping to finance it,” King said, adding they made it $3,000 to make it “significant enough” to make a difference.

This is the second year the company has offered the benefit to its workers, and nearly half of the staff has taken advantage of it.

“Solo travel has always been on my to-do list, but having just started my career, I assumed I would have to compromise this dream. I’d ask myself, can I afford to spend significant time away? Would I have to sacrifice a job I love for an experience I’ve always wanted,” Max Vanderkooy, consultant at Media Profile, said in a news release.

King says a group of three women – who didn’t know each other before working at the company – pooled their benefits together, so they had $9,000 to work with as they travelled throughout France.

“This also, you know, achieves one of the objectives, which is to kind of reignite people to help them be more creative, getting them out of their heads and their spaces,” she said.

King hopes that other progressive employers consider providing something like this to staff, if they are concerned about retaining people at their company.

“We’ve had far, far less turnover since we introduced Work Away,” she said. “It’s an amazing perk for [employees], but it’s also good for agency owners, company owners, managers – I mean, you’re gonna have a much happier workforce.”

Outside of the Work Away benefit, the company also gives employees the day off work on their birthday, mental health days, and the option to work a four-day workweek, though with a 20 per cent pay reduction.