TORONTO - Premier Dalton McGuinty is inching closer to a budget deal with the NDP that would allow his minority government to survive a crucial budget vote next week and avoid plunging the province into another election.

"These steps can be taken within the government's fiscal plan and by finding savings in less important programs," he said in a statement Friday afternoon.

McGuinty promised to provide assistance to child care operators, amounting to $242 million over three years that will come from the existing education budget.

The governing Liberals also plan to increase the Ontario Disability Support Program by one per cent this fall, instead of freezing it for a year. It will cost the province $33 million, which will come from $55 million in savings expected to be generated by lowering the cost of the top 10 generic drugs paid for by public drug plans.

McGuinty's olive branch came a day after NDP Leader Andrea Horwath took one of her key demands off the table -- removing the provincial portion of the HST from home heating bills.

"Over the weekend, we'll continue to analyze how else we may be able to work together to make the budget stronger," the premier said in the statement.

"I've asked Ms. Horwath to meet on Monday and have requested that she come prepared, on behalf of her party and caucus, to reach an agreement."

The NDP have plenty of other items on their list, including hiking taxes for the rich, investing in home care and community care, a $250-million job creation tax credit, keeping Ontario Northland in public hands and helping industries affected by the budget, such as horse racing and tourism.

But the Liberals maintain that the measures are too expensive for a province that must eliminate its $15.2-billion deficit in 2017.

NDP house leader Gilles Bisson, a key player in the budget talks, was tight lipped on whether the two measures are enough to secure his party's support for the budget.

"We'll look closely at the proposals put forward by the premier," he said in a statement.

"We owe it to working parents who need daycare and people trying to get by with disabilities to study the details carefully. We still have a long way to go, but as long as we're talking and exchanging ideas that's reason to be optimistic."

The closed-door discussions, which include government house leader John Milloy and both McGuinty and Horwath's chiefs of staff, are expected to stretch into the weekend.

Even if a deal isn't reached by Tuesday, the NDP could buy more time by abstaining from the vote on the budget motion. They'll have a second chance to decide the government's fate when another confidence vote on the actual budget legislation is called.

The Progressive Conservatives, who have already vowed to vote against the budget, dismissed McGuinty's concessions, saying they won't stop the province from tumbling further into debt.

"The simple fact is that this budget fails to take the action required to prevent a $30 billion deficit and does not have a pro-growth strategy for the economy," finance critic Peter Shurman said in a statement.

"No amount of tinkering will fix this budget." 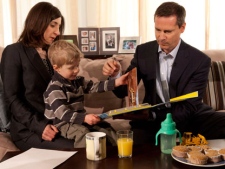 Ontario Premier Dalton McGuinty reads a books with two-and-a-half-year-old Rowan Henderson as his mother Naomi looks on in Ottawa on Friday, March 30, 2012. (THE CANADIAN PRESS/Adrian Wyld)