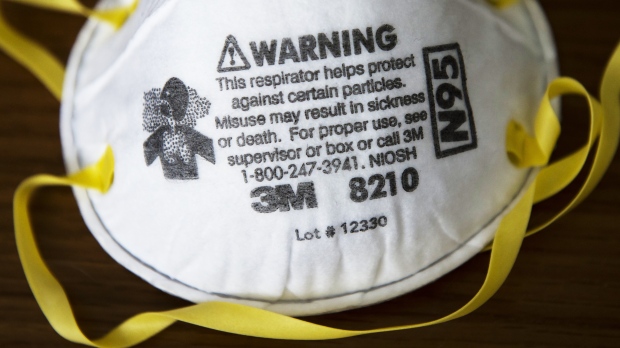 WASHINGTON - The U.S. company at the centre of a short-lived dispute with the White House over medical-gear exports to Canada is going to court with an Ontario reseller it accuses of profiteering during the COVID-19 pandemic by selling coveted N95 face masks at exorbitant prices.

A notice of application filed Tuesday in Ontario Superior Court in Windsor, Ont., alleges that Caonic Systems Inc. set up a web domain on the e-commerce platform Shopify and used it to sell masks it claimed had been made by Minnesota-based 3M in Singapore and the United Kingdom.

It further alleges that Caonic claimed a phoney affiliation with 3M and continued to market the masks on different Shopify-based sites even after receiving a complaint, charging $17 US apiece for the masks - more than five times the $3 list price.

“At 3M we are working hard to continue to increase production of respirators for the health-care workers who need them the most in the fight against COVID-19,” senior vice-president Denise Rutherford said in a news release.

“We are dedicated to putting a stop to those who are trying to cash in on this crisis and have taken legal action when we've identified illegal behaviour in New York, California, Florida, Texas, and now Canada.”

None of these allegations have been proven in court. Inquiries to Caonic's lawyers were not immediately returned Tuesday and it was not clear whether the company intends to oppose the application.

President Donald Trump called out 3M earlier this month upon learning that the company had been exporting American-made N95 respirators - a vital and hard-to-find piece of personal armour for medical workers treating COVID-19 patients - to customers in Canada and Mexico, in spite of overwhelming demand for the masks in the United States.

The company pushed back, warning that backing out of existing export agreements at a time of crisis would have serious humanitarian consequences and would ultimately result in fewer masks being available in the U.S. Eventually, the company agreed to bring masks in from its foreign plants and exemptions were carved out to allow exports to Canada to continue.

3M has filed for a court order that would require Caonic to help locate and identify any unsold masks, as well as to provide sales and customer information.

If the masks prove to be authentic 3M products, the company “will support returning them for use in efforts to fight COVID-19,” although whether they would remain in Canada was not clear. Any damages awarded as a result of the lawsuit will be donated to pandemic-related non-profit organizations, 3M said.

“This application is somewhat unconventional, but we are in unprecedented times,” says the notice of application, which appears designed to allow the court proceeding to take place on an expedited electronic basis in order to mitigate the potential impact on public health.

“3M intends to soon advance comprehensive claims against the infringing parties,” it adds, but the company's immediate goal is to prevent the continued sales of the masks, locate the stock, verify its authenticity and redistribute the masks to health-care workers if they prove to be the genuine article.

“The infringing parties have retained experienced litigation counsel and advancing a trademark action will take considerable time,” the notice reads. “3M is prepared to delay adjudication of its substantive claims in favour of public safety and the application's expedited consideration.”

The document alleges that Zhiyu Pu, one of Caonic's two directors, placed an order for thousands of 3M respirators from a company based in Nigeria back in early December. It alleges he began selling the masks in late February, “at exorbitant prices and using 3M trademarks without authorization,” shipping them to locations across Canada the following month.

3M has already launched similar legal action in several U.S. states accusing resellers of trying to capitalize on the shortage of equipment, but Tuesday's action marks the first time that effort has crossed into Canada.

“Prior to filing this action, 3M reported the information regarding these defendants to the Ontario authorities,” the company said. “The goal is to prevent fraud before it starts and stop it where it is happening.”

This report by The Canadian Press was first published April 21, 2020.