MERRITT, B.C. -- Dozens of tourists were injured, six of them critically, when a bus carrying them through a picturesque British Columbia mountain pass rolled over Thursday.

RCMP Sgt. Norm Flemming said 56 passengers suffered some sort of injury when the southbound bus crashed at about 3 p.m. on the Coquihalla Highway, about 30 kilometres south of Merritt. The area is about a three-hour drive northeast of Vancouver.

Six of the passengers were in critical condition and 15 were seriously hurt, said Flemming. The rest suffered bumps, bruises and cuts requiring stitches, he said.

"We don't have any fatalities listed yet and we're just crossing our fingers and hoping for the best on that one," he said.

Flemming said the cause of the accident is under investigation. However, he said the bus was the only vehicle involved.

Flemming said two interpreters were on the bus and he described the passengers as Asian, but he had no additional information.

Nick Kam, director of service for Super Vacation, a company based in Richmond, B.C., that identifies itself on its website as the "largest Chinese tour operator in North America," confirmed the bus was on a tour organized by his company.

"It's our tour, yes," Kam told The Canadian Press.

Kam said the bus was not owned by Super Vacation but was chartered through another company, which he didn't identify. He also said the other company provided the driver.

After Kam placed the call on hold, another man who did not identify himself picked up the phone and said the tour was returning from the Rocky Mountains and was on a leg between Kamloops, B.C., and Vancouver.

When asked about the passengers' origins, the second man said they came from "everywhere."

Daniel Parsons was on his way home from work when he happened upon the scene. Police and ambulances were already there and two school buses had been brought in to help with the injured, he said.

"You could see the bus, it was right off the side of the highway and it looked like it had rolled over," Parsons said.

He said the crash appeared to happen along a slight curve in the highway.

Parsons snapped a photo as he passed by. The white bus can be seen upright on the side of the highway with visible damage to its side. Passengers and emergency workers can be seen standing alongside the bus, with debris strewn about the road.

Grace Kucey of Kelowna General Hospital said her facility and a hospital in Kamloops were under a code orange. Kucey said Kamloops was expecting about 40 passengers, with the rest heading to Kelowna. Staff were ready to triage patients, she said.

The highway was closed Thursday evening, with air ambulances landing on the roadway.

Super Vacation's website says the company was established in 1981 in Lost Angeles, Calif., by a woman named Helen Koo.

The company has 15 branches and operates an office in Richmond, B.C. It employs more than 300 staff and owns at least 30 deluxe tour coaches in Canada and the United States. It says it operates more than 150 monthly tours and serves more than 150,000 customers every year.

- With files from Keven Drews and James Keller in Vancouver and Tim Cook in Edmonton. 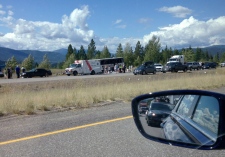 Emergency response teams attend the scene of the B.C. bus crash, about 30 kilometres outside Merritt on the Coquihalla highway, on Thursday, Aug. 28, 2014. (The Canadian Press/HO-Daniel Parsons)