Additional cops to be deployed overnight to combat gun violence 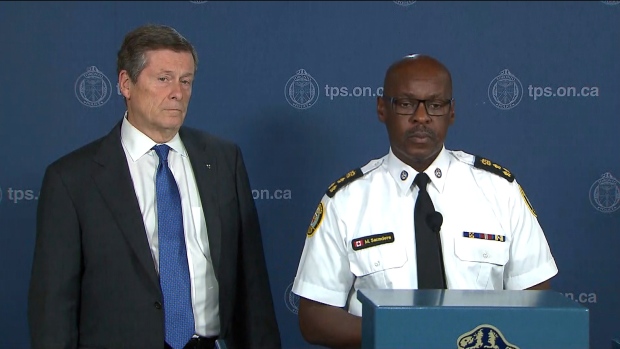 Police Chief Mark Saunders has announced that up to 200 additional front-line officers will be deployed during the nighttime and early-morning hours this summer in an effort to put an end to a recent surge in gun violence.

Saunders made the announcement at police headquarters on Thursday morning.

He said that starting on July 20, the additional compliment of officers will be posted to priority areas between the hours of 7 p.m. and 3 a.m. “when most gun violence takes place.”

The increase in officers during the key overnight hours will be made possible through an increased reliance on overtime that will cost the city about $3 million, Saunders said.

“Our focus during this timeframe will be intelligence-led with the intention of not saturating the neighbourhoods but to have our police officers focus on those very few who are motivated, have access to and who use guns across the city,” Saunders said. “Together working with the community and various agencies I am confident that we will have successful outcomes.”

Saunders has previously said that there are about 245 cops working between the hours of 10 p.m. and 3 a.m., so the additional 200 officers expected to be deployed at “peak hours” on “certain days” is significant.

He said that police already know “who the players are across the city” in terms of gang violence and can use the additional manpower, in part, to go after those who are wreaking havoc in some communities.

There have been 54 homicides so far this year, compared to 24 by this point last year. The five-year average is 29.3.

“First of all it is for business continuity and to make sure that we are able to respond to those high-priority calls but secondly there is going to be another layer and that will be specific and targeted to gun violence,” Saunders said of the additional manpower.

The announcement of the additional officers comes after a particularly public dispute between Saunders and Toronto Police Association President Mike McCormack over the last few days.

McCormack has blamed a reduction in the number of front-line officers for the increase in gun violence while Saunders has maintained that the number of cops on the street during the key overnight hours has remained consistent.

During an appearance on CP24 earlier this week, McCormack said that there are 800 fewer officers now than there were seven years ago due to a modernization plan “that wasn’t thought out the way it should have been” and that Tory ought to bring forward an “action plan” to “fix it.”

Saunders, however, pushed back the next day, telling CP24 that the underlying issue is that police are being inundated with non-emergency calls, such as downed wires or noise complaints.

A comprehensive plan to modernize the Toronto Police Service does include several initiatives to hand over the responsibilities for certain calls, including a plan to have bylaw enforcement officers respond to noise complaints.

“On average we have about 245 officers out there (overnight). I have never changed that but we are taking the lion’s share of non-emergency calls,” Saunders said on Thursday. “That partnership piece, where other people and entities need to step up and take account for those calls is a work in motion.”

The war of words between Saunders and McCormack over staffing levels has been ongoing for several years now and is not likely to come to an end with the deployment of extra officers over the next eight weeks.

Speaking with CP24 on Thursday afternoon, McCormack did welcome the news that additional officers will be patrolling the city but said that it is a temporary, imperfect solution.

“There is an overtime component to this so it is not like we are getting 200 fresh officers and putting them out there in the street but what we have seen now is at least an acknowledgement from the mayor and the chief that we are understaffed and that we need to get resources out on the street, so it is encouraging that they are listening to the membership and association because everybody on the ground is telling them the same thing,” he said.

McCormack said that he plans to meet with Saunders this afternoon to further discuss his plans for the rollout of the additional staffing.

He said that he will also keep pushing for the hiring of additional officers.

“I don’t want to be going through this every summer. Let’s do something long term to fix it with staffing.”

Money will also be invested in community programs

The plan to increase the deployment of officers on city streets is just one part of a wider gun violence reduction plan developed jointly by the TPS and the City of Toronto.

According to Mayor John Tory, up to $12 million will be spent on existing community programs with some of that money flowing in time for this summer.

He said that the money will largely support organizations involved with youth employment, violence reduction and stay in school initiatives.

“Yes there is an enforcement and police resource piece to this but there is also a heavy element of investment in the community and in programs that are going to help to keep those communities safer, keep them more stable and make sure the kids in particular stay away from this kind of activity,” Tory said.

Tory said that the $12 million for community programs will be paid for by both the city and with expected funding from the national crime prevention strategy.

He said that further details will be announced next week on which organizations will be receiving funding.

“I have sort of divided my asks of both city officials and other levels of governments into two categories. One is quite literally programs we could look at expanding this summer so we could have some positive effect this summer,” he said.

Tory said that he has also asked provincial officials to help reduce some of the red tape associated with the planned hiring of 200 police officers.

Union officials have said that only 57 officers of the 200 have been hired so far and that only 41 of those have gone through training.