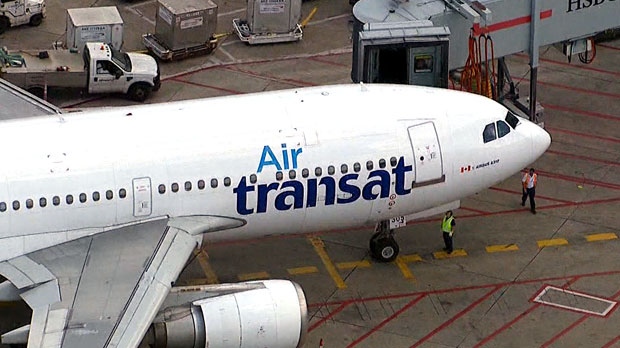 MONTREAL -- Some 189 Air Transat passengers travelling from Montreal to Florida had a few scary moments Saturday morning after their plane was forced to make an emergency landing at a New Jersey airport.

Julie Chauvin said she and nine of her family members were travelling to Fort Lauderdale for a cruise when they were told over the loudspeaker to follow emergency procedures in preparation for landing.

The terrified passengers followed instructions to crouch forward with their heads against the seat in front of them, she said.

"People started to get scared, we didn't know what was happening, we were scared," she said in a phone interview. "We were leaning forward, and waiting, and the pilot told us we were making an emergency landing."

Air Transat spokeswoman Debbie Cabana confirmed the Boeing 737-800 was forced to land in Newark, NJ due to reports of smoke in the cargo hold.

"Our 189 passengers' safety is our top priority and they were evacuated promptly upon landing," she said in an email.

The Federal Aviation Administration said on Twitter that airport firefighters met the plane on the runway and the passengers were evacuated using slides.

Chauvin said she never smelled any smoke in the plane, and the landing went smoothly.

The resident of Beloeil, east of Montreal, said it only took two or three minutes for authorities to arrive and to instruct the passengers to evacuate the plan by jumping onto cushioned mattresses.

Chauvin said the incident was managed in an organized fashion, and passengers were well treated.

Nevertheless, she said it's not an experience she wants to repeat.

"You don't want to live that twice," she said. "It was very stressful, people were there but it's stressful, it's scary."

Cabana said nobody was injured, however a Port Authority of New York and New Jersey spokesman said two passengers reported minor injuries, and one was taken to a hospital to be examined.

Transat said another aircraft would be sent to Newark to operate the flight to Fort Lauderdale.

Chauvin said she wasn't aware of any injuries but believes one person may have felt unwell after exiting.

She said Saturday afternoon that her money and personal belongings were still aboard the aircraft, and it wasn't clear when she would be able to reach her destination.