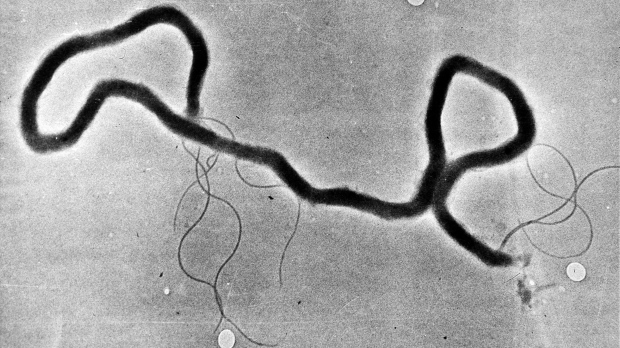 In this May 23, 1944 file photo, the organism treponema pallidum, which causes syphilis, is seen through an electron microscope. (AP Photo, File)

EDMONTON - Syphilis rates not seen in Alberta since 1948 have prompted the province's chief medical officer to declare an outbreak of the disease and encourage people to get tested for it.

A total of 1,536 cases of infectious syphilis were reported in 2018 compared with 161 in 2014 - almost a tenfold increase, said Dr. Deena Hinshaw, Alberta's chief medical officer.

She added that the province has seen similar increases in rates of congenital syphilis, in which the infection is spread from a mother to her unborn child.

“It is very important for anyone who is pregnant to seek early prenatal care and get tested for syphilis during pregnancy,” she said.

“Congenital syphilis is a disabling and life-threatening disease. But if diagnosed and treated early during pregnancy, the mother and baby can both have better health outcomes.”

Hinshaw said that congenital syphilis was rare in Alberta before the recent outbreak, but in the last two years 21 cases have been reported.

A provincial outbreak co-ordination committee has been set up, she said. It will work over the next three months to determine how to increase testing for sexually transmitted diseases and reduce the overall number of syphilis cases.

Hinshaw said she couldn't comment on how Alberta compares with the rest of the country because other jurisdictions have not released recent syphilis figures.

“This a trend we are seeing across Canada and around the world, so syphilis cases are sharply rising in many jurisdictions, not just our own,” Hinshaw said.

Dr. Laura McDougall, senior medical officer for Alberta Health Services, said those numbers could also be skewed by the volume of testing.

“There is no doubt at all that we are in an outbreak situation with a case load that is concerning and alarming that requires action. But it is challenging to look at comparisons,” McDougall said at Tuesday's news conference.

Meanwhile, figures from Alberta Health Services show that almost two-thirds of syphilis cases in Alberta were reported in the Edmonton area.

The Edmonton zone saw 977 cases in 2018 compared to 206 in Calgary. There were 88 cases in central Alberta, 208 cases in northern Alberta and 31 cases in the southern part of the province.

Hinshaw said the province's outbreak committee will be looking into why Edmonton has the most reported cases, as well as why the most affected age group are people between the ages of 15 and 29.

“Ultimately, when an infection gets into a particular network of people who are connected, it can spread quite quickly,” she said.

Alberta Health Services says the best way to protect against sexually transmitted infections such as syphilis is consistent condom use.

It's also suggested that sexually active people should get tested every three to six months if they have a sexual partner with a known STI, have a new sexual partner or multiple or anonymous sexual partners, have previous history of an STI diagnosis or have been sexually assaulted.

Like other STIs, the symptoms of syphilis may not be obvious. Hinshaw said syphilis could infect the brain, heart and eyes if it is left untreated.