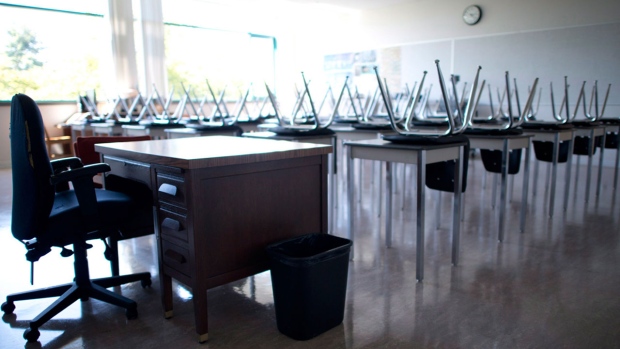 Teachers at Ontario’s French-language school boards have announced a work-to-rule campaign that will begin on Thursday, creating a relatively unprecedented situation in which every single public teacher’s union in the province will be engaged in some sort of job action.

The Association des enseignantes et enseignants franco-ontariens, which represents 12,000 teachers and educational staff at approximately 460 schools, announced the campaign during a press conference on Tuesday morning.

In a press release, the union said that the move follows its members voting 97 per cent in favour of strike action in December.

“When you listen to the (education) minister he says that every three years this (escalation) comes back but for our union in the last 20 years there has not been any strike action,” AEFO President Rémi Sabourin told CP24 following the press conference. “But our members are ready. They have told us that this cannot continue. We need to make education an investment. It is not about dollars and cents.”

The union says that the work-to-rule campaign will mostly affect “administrative duties,” though it is not immediately clear what specific work members will no longer take on.

The announcement of the campaign comes one day after teachers in the province’s Catholic school boards began a similar job action and announced plans for a one-day walkout on Jan. 21.

Members of the Elementary Teachers’ Federation of Ontario (ETFO) and the Ontario Secondary School Teachers' Federation (OSSTF) have also been working to rule since November.

ETFO has said that it will escalate to rotating one-day strikes as of Monday while OSSTF has been conducting rotating strikes on select Wednesdays since December.

Speaking with CP24 on Tuesday, Sabourin said that his union has been trying to negotiate but feels like their “hands are tied” due to the government’s decision to unilaterally increase class sized and introduce mandatory e-learning courses at the high school level.

“Let’s get to the table and find solutions,” Sabourin said. “AEFO has always been about finding solutions but right now it is very hard with the e-learning decisions and class-size decisions. “

Education Minister Stephen Lecce has previously accused the province’s teacher unions of needlessly escalation job action at the expense of students and parents.

Some parent groups, however, have spoken out in favour of teachers and against provincial cuts to the education system.

On Monday members of Ontario Families for Public Education and the Ontario Parent Action Network held a joint press conference to speak out against the cuts and launch an online petition calling for their reversal.

“Parents and education workers, we are on the same side. We are fighting together to stop this attack on public education and to ensure a safe and supportive quality education for our kids,” parent Liana Salvador-Watts said. “This is a critical moment and a moment now where we are now asking parents, guardians and community members to step up the pressure and take action.

In a statement issued on Tuesday morning, Lecce said that the “continued and escalating disruption” being pursued by the province’s teacher unions has been “detrimental to the student experience” while causing “frustration and uncertainty for parents.”

He went on to call on the unions to “stop playing with students' futures, and focus on reaching a deal that keeps our students in the classroom where they belong.”