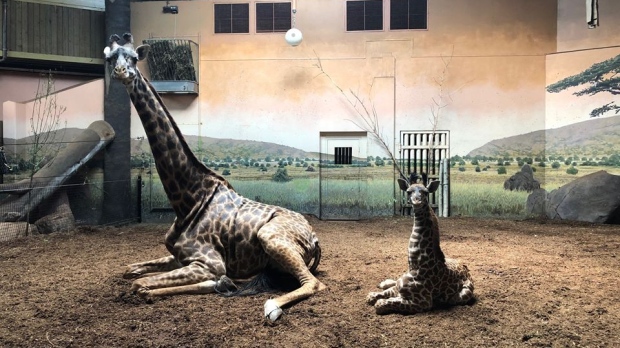 A Masai giraffe born at the Toronto Zoo last month finally has a name.

The zoo announced on Sunday that the female calf will be called “Amani Innis Dagg.”

Amani, which means peace in Swahili, received the most votes out of the eight potential names chosen in collaboration with Sunir Chandaria, the Honorary Consul of Kenya in Toronto and Toronto Raptors President Masai Ujiri.

More than 20,000 people voted in their online naming promotion, the zoo said.

“Amani is an important addition to a healthy and viable population as part of the Association of Zoos and Aquariums’ Masai giraffe Species Survival Plan. We are very proud that Amani will be an ambassador for Masai giraffes, educating the public on the challenges this species is facing in the wild so we can address the threats they face and halt declining populations,” Dolf DeJong, Chief Executive Officer of the Toronto Zoo, said in a statement.

Amani was born on May 12 and was the first offspring of Mstari, a six-year-old female giraffe, and Kiko, a seven-year-old male who moved to the Toronto Zoo from South Carolina in 2015.

Before naming the giraffe, the female calf had been affectionately called by the zoo as Baby Long Legs.

The zoo gave Amani the last name Innis Dagg to honour Canadian zoologist Anne Innis Dagg, who is credited with being the first to study wild giraffes.

“I am thrilled to have the baby named after me and so excited. Every night when I go to sleep, I will wonder what my new little girl will be doing. It means so much to me that the Toronto zoo would be so kind,” Dr. Dagg said in a statement.

The announcement of the name was made on the same day as zoos celebrated World Giraffe Day.