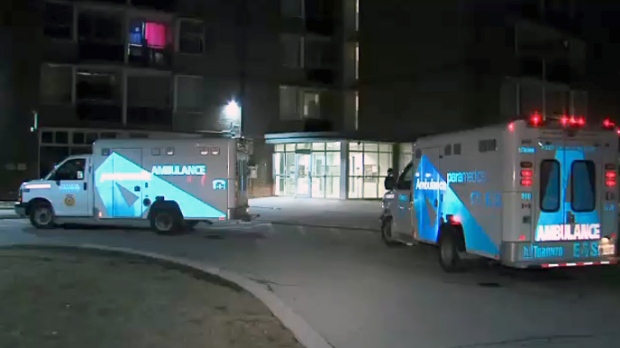 Ambulances are parked outside Pelham Park Gardens where the discovery of a deceased female was found on March 13, 2019.

An arrest has been made in connection with the murder of a female found dead at an apartment building in Pelham Park early Wednesday morning, CP24 has learned.

Officers were called to a residential building on Pelham Park Gardens, located in the area of Lansdowne Avenue and Davenport Road, at 2:54 a.m. for a suspicious death.

When police arrived, a female victim was located in a unit on the 17th floor and was pronounced dead at the scene.

CP24 has confirmed that a male has been arrested and charged with second-degree murder in connection with the homicide.

The documents also identify the suspect as 38-year-old Andrew Gerber. He appeared in court on Wednesday and was remanded into custody until his next appearance scheduled for March 27.

A source confirms that the suspect is an acquaintance of the deceased.

Toronto police tape off the entrance to a building in Pelham Park where the body of a female was found on March 13, 2019.