As residential evictions resume in Ontario, NDP calls for ban during the pandemic 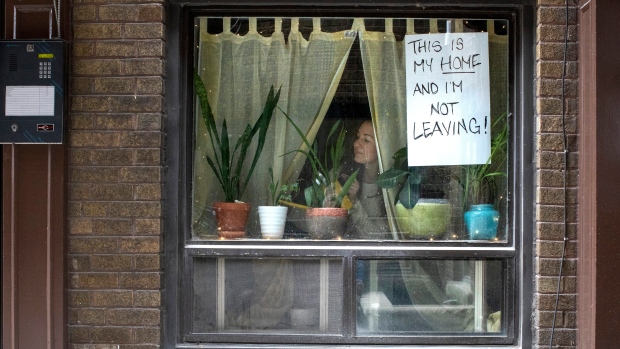 As the enforcement of evictions resumes across much of Ontario this week, the NDP are tabling a bill that would prohibit residential evictions until after the pandemic ends.

The enforcement of residential evictions has been on hold in Ontario since the declaration of a second emergency due to the second wave of coronavirus in the province on Jan. 14.

While eviction proceedings could be initiated and prepared during the shutdown, they could not be enforced, aside from situations involving safety concerns and/or illegal activity. However the province tied the pause on evictions to the provincial stay-at-home order.

Most of the province came out from under that order this week, with 27 public health unit regions returning to the tiered reopening framework. That means evictions can now be carried out in those areas.

Toronto, Peel Region, and York Region are slated to return to the framework on Feb. 22, meaning evictions in those population-dense areas would be able to resume on Monday.

“Families all over the province are at risk of losing their homes, through no fault of their own, after losing income due to COVID-19,” Toronto Centre MPP Suze Morrison said in a press release issued by the NDP Wednesday. “We are still very much in the middle of this pandemic, and it’s not safe to force people to find shelter, apartment hunt, crash with friends or family, or survive on the street while the virus is spreading in our communities. It’s putting people at risk of catching and spreading COVID-19.”

Morrison says her proposed bill, “No COVID Evictions,” would protect tenants for the entire duration of the pandemic.

On Wednesday, the medical officers of health in Toronto and Peel Region said they are calling on the province to extend its stay-at-home order for those areas for at least two weeks due to the increasing risk posed by the increasing prevalence of more contagious COVID-19 variants.

“As a public health physician, I've never been as concerned about the threat of COVID-19 to your health, as I am now. Not at any other point in the pandemic,” Toronto’s medical officer of health, Dr. Eileen de Villa, said at a news conference.

If the province agrees to extend the stay-at-home order, the pause on evictions would also be extended according to statements made by the province to date.

The call comes the same day that a man living in a wooden shelter in a downtown park died in a fire. Toronto Fire said it marks the 27th encampment fire they have responded to so far in 2020 and that such calls have skyrocketed during the pandemic as people experiencing homelessness seek shelter in makeshift encampments due to a lack of capacity in the city’s overstretched  shelter system.

Local and provincial officials have urged landlords and tenants to make arrangements for partial rent payment or deferred payments wherever possible in order to avoid people being put out of their homes during the pandemic.

“We encourage landlords and tenants to work together during this difficult time to establish fair arrangements to keep tenants in their homes,” the province says on its website.

While the provincial government has frozen rent for 2021, it has stopped short of issuing a longer-term prohibition on evictions.