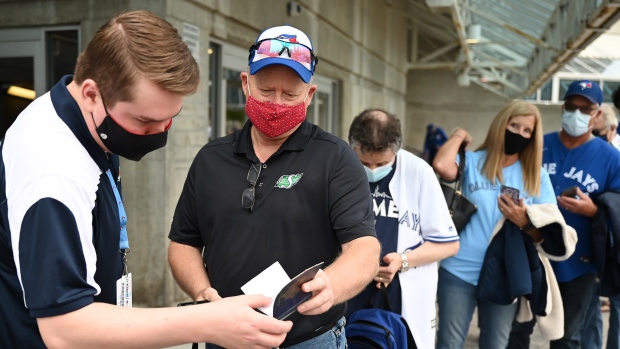 Toronto Blue Jays fans show either proof of being double-vaccinated or a negative COVID-19 test prior to entering Rogers Centre before an American League baseball game between the Toronto Blue Jays and the Tampa Bay Rays in Toronto on Monday, Sept. 13, 2021. THE CANADIAN PRESS/Jon Blacker

The Blue Jays are planning to expand ballpark capacity beyond 15,000 fans for the last six home games of the season and now say all fans over the age of 12 must be fully vaccinated to enter the Rogers Centre.

The team made the announcement in a news release issued Thursday morning.

“The Blue Jays are in the final days of a heated postseason Wild Card race and need fan support more than ever to create the home field advantage that our fans and team deserve down the stretch,” the statement read.

“The club has been working closely with the Premier’s office, the Chief Medical Officer of Health, and Minister MacLeod’s office on increasing ballpark capacity safety in line with all public health protocols.”

The Blue Jays have said additional tickets will be sold for the final six home games but have not confirmed exactly how many fans they are preparing to allow inside.

The team told CTV News Toronto on Thursday that some seats have been opened on the 500 level for the last six games, with tickets starting at $15.

“In the event that government regulations do not allow for us to expand Rogers Centre capacity beyond 15,000 fans, impacted ticket purchasers will be directly notified of their ticket cancellation and issued a refund via their original method of payment,” the statement continued.

Unvaccinated fans were previously allowed to enter the stadium if they could provide a negative COVID-19 test ahead of the game but the Blue Jays now say all fans must be fully vaccinated.

“The Blue Jays are adhering to all public health guidelines and in addition, are requiring proof of full COVID-19 vaccination for all fans aged 12 and older entering Roger Centre,” the statement read.

“A negative COVID-19 test will no longer be accepted except for individuals with a doctor’s note indicating they cannot receive the vaccine due to medical exemptions.”

The club says they have communicated the change to all fans and unvaccinated ticket-holders who purchased seats for future games can either transfer their ticket to a vaccinated person or request a refund.

The new policy comes one day after the province launched its vaccine certificate program, requiring people 12 and older to show proof of vaccination to enter indoor spaces at many non-essential businesses, including gyms, movie theatres, and restaurants.

Last week, Maple Leaf Sports and Entertainment (MLSE) said it was preparing for a “return to full capacity” at MLSE venues, including Scotiabank Arena.

“We believe we are able to create the safest experience possible and are planning for a return to full capacity in 2021,” a statement released by MLSE read.

“Our ticketing rollout allows for flexibility in the coming weeks to meet the process required to achieve that. We expect more direction to be available to us in the coming days.”

Under the current provincial guidelines, indoor sports and recreational facilities can only host up to 1,000 spectators, well below the 20,000 seats available inside Scotiabank Arena.

Outdoor sports venues, including the Rogers Centre and BMO Field, were given the green light earlier this summer to host up to 15,000 fans per game.

Provincial health officials have not ruled out expanding capacity limits in spaces where vaccination is mandatory but have provided few details about when that could happen.

“I would think that the government should assess that if everyone in that environment is immunized then that's a very low risk event,” Dr. Kieran Moore, Ontario’s top public health doctor, said on Aug. 24 when asked about the possibility of lifting capacity restrictions.

“So I would hope that the government will make a decision to enable them to move forward even if we have other restrictions in place.”

A spokesperson for the Ministry of Health told CTV News Toronto Thursday that Moore will address any changes to capacity limits in settings with vaccination requirements "once they are finalized and approved by cabinet."