Boards must conduct asymptomatic testing in at least five per cent of schools every week: Lecce 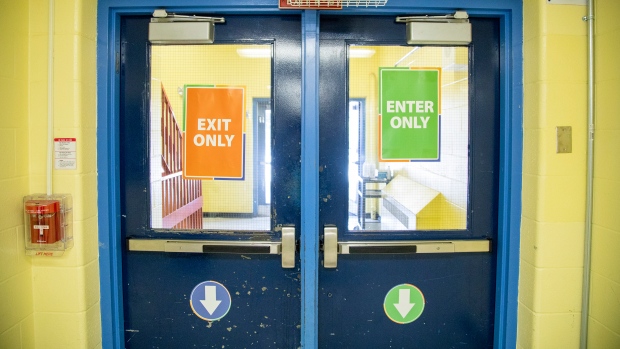 Signs helping direct the flow of student traffic are seen at Kensington Community School amidst the COVID-19 pandemic on Tuesday, September 1, 2020. THE CANADIAN PRESS/Carlos Osorio

All school boards will now be required to conduct asymptomatic testing of staff and students in at least five per cent of schools within their jurisdiction every week.

Education Minister Stephen Lecce sent a memo to boards advising them of the new policy on Tuesday.

He said that the boards are being encouraged to prioritize schools located in areas with high rates of COVID-19 transmission as well as those “where access to current testing programs may be challenging.”

The policy takes effect for schools in Toronto, Peel and York regions as of today. It will then go into effect for all remaining school boards as of Feb. 22.

In the Toronto District School Board it means that asymptomatic testing will have to be undertaken in at least 27 different schools each week. In the Peel District School Board, which is the second largest public board in Ontario, asymptomatic testing will have to be conducted at 13 different schools each week.

“The decision to scale up asymptomatic testing is really built on the premise of giving assurance to parents that we are going to be in those schools wherever there are challenges,” Lecce said during an interview with CP24 earlier on Tuesday. “So we have dedicated a minimum of five per cent of all schools – it is about 40 in Toronto alone - that will be done on a weekly basis to build up that capacity and obviously provide an easier access point for testing. It is part of our plan to build up those layers of protection and I think demonstrates to everyone – our staff, our students and our parents at home – that we will do whatever it takes to protect students as we deal with these new variants.”

The province has set aside 50,000 tests a week for the testing of asymptomatic staff and students at public schools and Lecce said in the memo that boards will be required to submit weekly reports to the ministry outlining their testing activities.

He said that there is also an expectation that boards will reach at least two per cent of their student population each week through asymptomatic testing.

The new provincewide voluntary, asymptomatic testing program comes after a pilot program in Toronto, Peel, York and Ottawa in December.

That program led to the discovery of a COVID-19 outbreak at Thorncliffe Park Public School, where more than two dozen positive cases involving staff and students were discovered.