Body found in search for boy at scene of Markham fire

Officials say a body has been found in the search for a 12-year-old boy who has been missing since a fire tore through his family’s Markham home over the weekend.

The fire broke out at a townhouse in the area of Bur Oak Avenue and Kenned Road at around 10 a.m. on Sunday.

Witnesses said there was a loud bang, followed by a fire that spread to adjacent homes.

A mother and her three sons were at home at the time of the fire.

The mom, 41-year-old Chia Hamid, and two of her sons – 14-year-old Ahmed and six-year-old Zheer – managed to escape the home. However they were rushed to hospital with critical injuries, where they remain.

The family’s middle child, 12-year-old Aran, has been unaccounted for since the fire on Sunday.

York Regional Police said Tuesday night that a body has been found in the search. However they said that it has not yet been positively identified by the coroner.

“Unfortunately this is the update we didn’t want to give,” Staff Sergeant Dave Mitchell of York Regional Police told reporters at the scene.

He said searchers discovered the remains of what appears to be a young person inside the structure at around 7 p.m. and search work then halted so that the coroner could attend the scene.

Douglas Browne, a deputy fire marshal, with the Office of the Ontario Fire Marshal, also spoke at the scene Tuesday and said investigators will be conducting a thorough and systematic probe into the blaze.

“We’ll be going through this with meticulous detail,” Browne said.

He said while it could take several weeks to determine the cause and origin of the fire, investigators have confirmed there was an explosion.

“There was a fire, there was an explosion. We can confirm those two facts at this point in time,” Browne said. 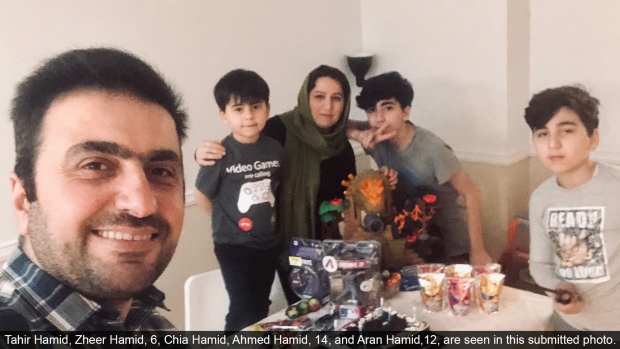 The children’s father, Tahir Hamid, was out running errands when the fire broke out. Speaking through tears at the scene of the wreckage Monday, the father told reporters that he had brought his family to Canada to keep them safe.

"I was coming to Canada to save my family," said Hamid.

The family is Kurdish and they fled Iran three years ago, looking for a better life in Canada.

Mitchell said area residents can expect to see crews searching the wreckage for answers for at least another three days.

“Right now we have more questions than answers and we need those answers and unfortunately we can’t expedite that in any way,” Mitchell said.

Markham Fire Chief Dave Decker said the local fire service will be supporting the OFM in its investigation.

Tahir Hamid is comforted by a family friend as crews search through the wreckage of his family's Markham home Monday May 18, 2020.