Bombardier sells remaining stake in A220 jetliner to Airbus 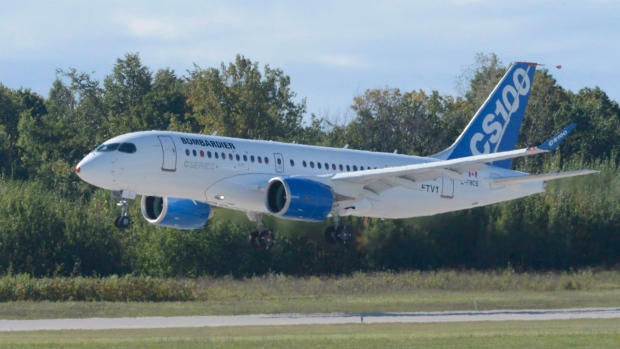 Bombardier's CSeries commercial jet takes off on its first flight on Monday, Sept. 16, 2013 in Montreal. Bombardier says Delta Air Lines Inc. has placed a firm order for 75 CS100 aircraft with options for an additional 50 CS100 aircraft in what would be the largest order for the CSeries jets. The company says, based on the list price, the firm order is valued at approximately US$5.6 billion. THE CANADIAN PRESS/Ryan Remiorz

MONTREAL -- Bombardier Inc. is completing its exit from commercial aviation as the plane-and-train maker sells its remaining stake in the A220 jetliner for nearly $600 million.

Bombardier said Thursday it has entered into an agreement with Airbus SE and the Quebec government in which the company has transferred its shares to Airbus and the province, its latest move to emerge from more than $9 billion in debt.

The deal boosts Airbus's share in the A220 program to 75 per cent from just over 50 per cent, while Quebec's stake rises to 25 percent from 16 per cent.

In exchange, the agreement hands Bombardier US$591 million, including US$531 million immediately.

The news comes as Bombardier reported a loss of US$1.61 billion for 2019 as rumours continue to swirl around the potential sale of one of its two main divisions later this year.

“We are looking at our options. As you can understand, it's very sensitive,” chief executive Alain Bellemare said on a conference call with investors Thursday morning.

“As previously announced, the company is actively pursuing options that would allow it to accelerate deleveraging, pay down debt and position the business for long-term success,” the company said in a statement.

Under the new deal, work packages for the A220 and A330 single-aisle planes will be transferred to Airbus through the Europe-based aircraft giant's subsidiary Stelia Aerospace, securing 360 jobs in Quebec, Bombardier said.

Quebec Economy Minister Pierre Fitzgibbon called the agreement a “win-win” for all partners.

“The agreement will allow Bombardier to improve its financial situation and Airbus to increase its presence and footprint in Quebec,” he said in a release.

Bombardier said that in 2016 - the year before it sold a controlling stake to Airbus - its commercial aerospace segment lost about US$400 million and was consuming roughly $1 billion in cash.

Bombardier, which reports earnings U.S. dollars, saw revenues decline three per cent year over year to US$15.76 billion in 2019, and two per cent to $4.21 billion in the quarter ended Dec. 31.

Three major rating agencies have voiced concerns this year over the finances of the firm, which said last month it is “actively pursuing strategic options to accelerate deleveraging.”

Bombardier, founded in Valcourt, Que., in 1942 as a snowmobile manufacturer, turned a profit in 2018 for the first time in five years as its business jet unit delivered and despite several train project challenges.

While high-margin jet deliveries continue to ramp up, analysts point to volatility in the luxury market of private planes compared to the relatively stable field of railcar construction, which is fuelled by government infrastructure projects.

The two divisions are Bombardier's main revenue streams after the Montreal-based company announced last year it would sell its aerostructures business for US$1.2 billion, which followed the sale of its Q400 turboprop business for US$300 million in 2018.