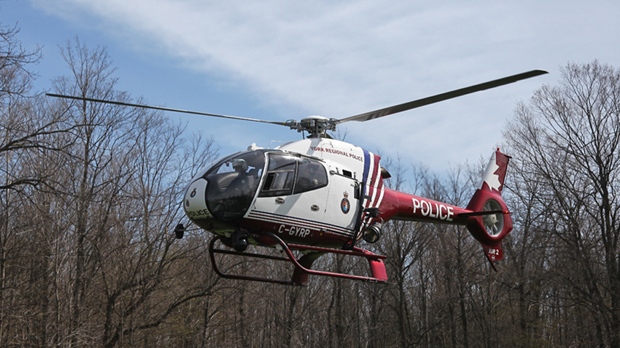 A 16-year-old boy is facing mischief charges after a laser pointer was directed at a York Regional Police helicopter and two large passenger jets flying over Vaughan on Saturday.

Investigators say that police helicopter Air2 was flying over the Parktree and Lucena drives area on a routine patrol at 8:40 p.m. on Saturday night when both the pilot and the helicopter’s tactical flight officer reported a laser beam pointed directly at them.

The crew diverted the chopper away from the laser and located the suspect on the ground.

The youth was arrested and charged shortly thereafter.

Pilots from those flights reported the incidents to Peel Regional Police.

The suspect, who cannot be identified per the terms of the Youth Criminal Justice Act, faces three counts of mischief endangering life and three counts of common nuisance.

He is scheduled to appear in court in Newmarket on Dec. 15.

Health Canada says exposure to a concentrated beam from a laser pointer can cause “flash blindness,” rendering a pilot incapable of operating an aircraft for a few seconds.

“Pointing a laser beam at an aircraft is intentionally and recklessly putting people’s lives in danger,” York Regional Police Chief Eric Joliffe said in a news release on Tuesday. “York Regional Police takes this offence very seriously and remains committed to ensuring the safety of all of our citizens and officers on the ground or in the air.”