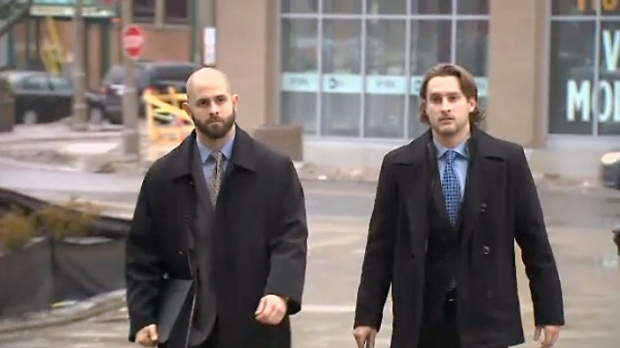 A Toronto police officer and his brother told investigators they feared for their lives during a late-night encounter with a young black man in Whitby, Ont., nearly three years ago, court documents show.

Michael Theriault and his brother Christian Theriault gave statements to police officers roughly an hour after the Dec. 28, 2016, incident, alleging Dafonte Miller attacked them with a metal pole after they chased him from their parents' truck.

Those statements, along with another one Christian Theriault made roughly two weeks later, were filed as exhibits in the brothers' trial, which began earlier this week in an Oshawa, Ont., court.

The two men are jointly charged with aggravated assault in the beating of Miller, and charged separately with obstruction of justice for how they portrayed the incident to investigators. They have pleaded not guilty.

Prosecutors allege the pair ran after Miller, who was 19 at the time, then brutally beat him, continuing the attack after the young man briefly escaped them. Court heard Miller's left eye burst during the incident, leaving him blind on that side.

The Crown alleges the brothers punched him and at times hit him with a long aluminum pipe.

In the accounts they gave separately to police, the brothers alleged Miller was the one wielding the pipe.

The pair described smoking in the garage in the early hours of the morning and hearing voices directly outside. The brothers said they opened the garage door and saw Miller leaving the driver's seat of their dad's truck, while another person left the passenger seat.

They said Michael Theriault, who was off duty at the time, started running after Miller, with Christian Theriault following suit.

“Once he realized we caught up to him, he started swinging a steel pipe at both my brother and myself, so we tried to defend ourselves and stop him,” Christian Theriault told police around 3:35 a.m. that day.

“He continued to swing the pipe at us and hit me repeatedly with the pipe all over and was hitting my brother, eventually we were able to stop him from hitting us.”

Michael Theriault told investigators he feared for both his and his brother's lives. “All three of us were fighting and I did not know if the male had another weapon on him, possibly a knife,” he said.

When asked where Miller would have gotten the pipe, Michael Theriault said it might have come from the gas line outside a home, while his brother said, “I'm assuming out of his pants.” The pipe, which was shown in court earlier this week, is at least a metre long.

Both brothers told police they weren't injured during the encounter, though Christian Theriault said his head and limbs were sore.

In a second interview with police on Jan. 9, 2017, however, Christian Theriault said he had since been diagnosed with a concussion and continued to be sore.

An officer asked him whether anything had been stolen from his parents' truck, to which Christian Theriault replied: “All the change in the front seat was gone.” He said the locks had not been picked or the doors pried open.

The brothers told investigators Michael Theriault was restraining Miller in order to arrest him.

On one of several calls to 911 entered as exhibits in the trial, Christian Theriault can be heard telling Miller, “You picked the wrong cars.”

Crown attorney Peter Scrutton said the brothers could also be found guilty of aggravated assault for carrying out an unlawful arrest or using excessive force during an arrest.

Court heard earlier this week from a man who said he saw part of the incident through his window after being awoken by screams.

James Silverthorn, a district chief with Toronto Fire Services, testified that he saw two people repeatedly punching someone pressed against a wall. He said the blows were continuous and “very hard,” the kind that could seriously and potentially fatally injure someone.

Silverthorn told the court a black male began pounding on his front door shortly afterwards, shouting for someone to call 911. He said the banging stopped, and some moments later, he saw someone on the ground in his driveway.

One of the two people from earlier was using what looked like a silver broomstick or pipe to “stab down” at the person on the ground so they couldn't get up, he said on the stand.

The trial, which is taking place before a judge alone, continues Monday.