Calls for city to declare state of emergency amid homelessness crisis 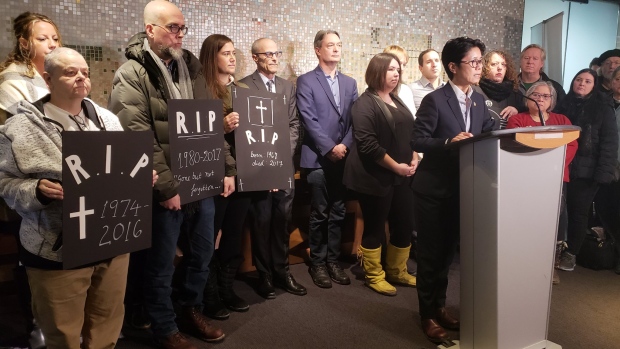 Toronto Centre Coun. Kristyn Wong-Tam speaks with reporters during a news conference on Tuesday morning. Wong-Tam is calling on city council to declare a state of emergency to respond to the homelessness crisis (Twitter/@kristynwongtam)

Two downtown city councillors are calling on the city to declare a state of emergency amid a housing crisis that they say is having “deadly consequences” for the less fortunate.

During the press conference, the councillors made the case for the declaration of a state of emergency to respond to the homelessness crisis. As part of that declaration, they said, council should ask Toronto’s Office of Emergency Management to “take immediate steps to augment services for homeless individuals” and to seek the support of the Red Cross in “managing the harm inflicted by the housing and homelessness crisis.”

They also called for the convening of an emergency meeting with representatives from the federal and provincial governments to develop an “urgent plan of action.”

“We want to acknowledge the conditions of housing that exist in Toronto right now as being untenable especially as it pertains to a 1.1 per cent vacancy rate,” Wong-Tam said. “We have 181,000 people sitting on the social housing wait list. That is nearly a death sentence.”

According to data from Toronto Public Health, there were a total of 145 deaths of individuals experiencing homelessness between January 1, 2017 and June 30th, 2018.

So far this year, another four people have died on the streets, including a woman who was reportedly sleeping in a laneway off University Avenue when she was run over by a garbage truck that was backing up earlier this month. Last week, police released the identity of that woman and asked for assistance from the public in locating her next-of-kin.

“We have people living under the Gardiner, living in ravines, living in parks. We have homeless encampments throughout the city. We also, at the city, are building what we call semi-permanent structures to house individuals now that don’t meet the shelter standards because we have created this new system called 24/7 respite centres,” Wong-Tam said. “All of this is coming to a head. The solutions we have used in the past to fight homelessness are failing.”

In a letter that will be considered by the city’s planning and housing committee today, Wong-Tam said that housing workers are reporting a “dramatic new wave of homelessness and under-housing,” that is being fueled by “all-time high rents” and an increasingly common practice in which landlords illegally evict their tenants “under the claim that they are renovating the units” and then put the same units back up for rent at a much higher price.

Speaking with reporters, Perks said the latter situation is one that his office is made aware of “every week.”

“Yesterday I got two calls in my office for people that lived at two different addresses that received eviction notes. These were apartments that are often rented in the $400, $500, $600 dollar range and they are being evicted so that the landlords can bring in new tenants at higher rents. You cannot find a housing unit at that price in the City of Toronto, so in other words they are being evicted onto the street,” he said.

Wong-Tam said that right now an applicant for affordable housing can expect to wait at least seven years for a bachelor unit, more than 12 years for a one-bedroom unit and at least a decade for multi-bedroom units.

She said that there are also 14,000 Toronto residents living with “serious and persistent mental health challenges that continue to wait for access to supportive housing,” compounding the problem.

“It is time to declare homelessness a crisis and bring all available emergency housing resources to bear, to preserve the sanctity of human life, and prevent further suffering,” she wrote in her letter.

In her letter, Wong-Tam contended that the homelessness crisis meets “several” of the province’s criteria for an emergency declaration but at an unrelated news conference on Tuesday morning Mayor John Tory cast doubt on the effectiveness of such a declaration.

He said that the city’s lawyers have previously told his office “that these kinds of declarations have have little effect in terms of achieving anything on behalf of the people who need our help.”

For that reason, he said that he is more interested in pursuing the vigorous expansion of the city’s affordable housing portfolio, beginning with a previously announced plan to make 11 parcels of city-owned land available to developers so long as a portion of all units they construct are set aside for social housing.

“One of the biggest initiatives in years undertaken by city government is coming before executive committee tomorrow. We are taking 11 pieces of city-owned land and creating thousands of affordable housing units and other rental units. It is a huge project and a huge undertaking and we are moving forward with it at the first meeting of executive committee, so I am devoting all of my energies to try to support and get the other levels of government to support these initiatives so we can move people out of the shelters,” he said.

While numerous advocates for the homeless have continually criticized the city over the overcrowding of its shelter system, Tory told reporters that he does not “believe that the continuous expansion of the shelter system represents an answer to something that is a significant problem for our city.”

Last night, about 93 per cent of the city’s 6,792 shelter spaces were occupied, though the occupancy rate was even higher in facilities for youth (99 per cent), women (99 per cent) and families (100 per cent).