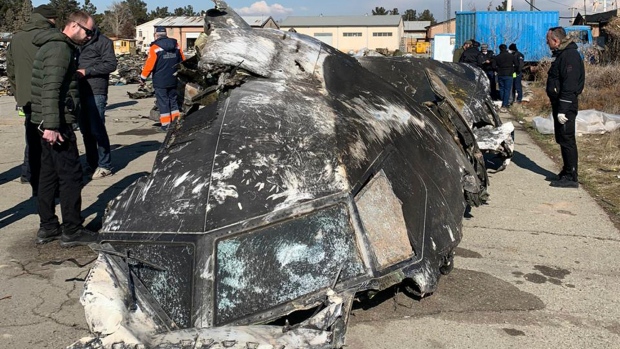 OTTAWA -- Prime Minister Justin Trudeau says Canada is insisting Iran respect the wishes of families when it comes to burying those who died when a passenger jet was shot down outside Tehran, noting doing so would also respect the principles of Islam.

“We recognize that it is a challenge that Iran does not recognizes double citizenship, but the focus that we've had on supporting the families has been to ensure that the families' wishes are respected in regards to burials, in regards to next steps, and that is what we have been insisting on with Iran,” Trudeau said Tuesday in Winnipeg as he wrapped up a three-day cabinet retreat.

“Respecting the wishes of the families lines up not with a question of citizenship, but it lines up also with international laws and practice and with principles around Islam for burials,” Trudeau said. “So we've been insisting on that with Iran and that is what we are hoping they will continue to do.”

All 176 people on board the Ukraine International Airlines flight PS752 were killed when the it crashed outside Tehran earlier this month after being hit by two Iranian surface-to-air missiles.

Ottawa has confirmed that included 57 Canadian citizens and 29 permanent residents of Canada.

The Canadian Press has independently confirmed at least 90 victims with ties to Canada, many of them students and professors returning after spending the December break visiting relatives in Iran.

On Monday, however, Iran's aviation authority issued a report that said the jetliner was carrying five Canadian nationals. The report says the figures reflected the passports used by passengers to board the aircraft.

That has raised concerns the bodies won't be allowed out of the country for those families wishing for a burial in Canada.

Iran is a majority-Muslim country, where most people are members of the Shia denomination. It is customary for remains to be buried as soon as possible after death.

Meanwhile, Canada and its allies are pushing Iran to release the black boxes from the jetliner to another country that can quickly download its crucial flight data.

Trudeau suggested that sending them to France would be a good idea.

“The black boxes are key to the investigation and there are rules around making sure that they are analysed quickly and properly in cases such as these. It is not simply a question of having the right experts in place to analyse the black boxes,” Trudeau said Tuesday.

“There has been broad consensus in the international community that France would be the right place to send those boxes, but we continue to pressure Iran to do just that,” said Trudeau.

Foreign Affairs Minister Francois-Philippe Champagne said Tuesday that request also emerged from his conference call on Monday with counterparts from Britain, Sweden, Afghanistan and Ukraine, all of which lost citizens in the crash of Ukraine International Airlines flight PS752.

It was the first follow-up conversation of the so-called International Co-ordination and Response Group for victims of PS752 since Champagne hosted its inaugural meeting in London last week.

Canada pushed to form the group to add weight and unity to the international effort to ensure Iran's co-operation after its Revolutionary Guards shot down the passenger plane earlier this month.

A summary of Champagne's call with representatives from the response group says Iran is co-operating with foreign experts in the investigation, but also emphasizes the need for Iran to allow a thorough and credible international investigation.

“Members of the ICRG call on Iran to move the black boxes to a facility with all of the technology and expertise required to quickly and reliably download and analyse the data without delay,” the summary says.

“Iran has indicated it is willing to do so.”

On Sunday, Champagne wrote to his Iranian counterpart, Mohammad Javad Zarif - two days after they met face to face in Oman - to stress Canada's view that the black boxes should be sent quickly for analysis by experts in either France or Ukraine.

A preliminary report released Monday by Iran's Civil Aviation Organization said it needs technical assistance from France and the United States to analyse the data.

The black boxes sustained physical damage, but their memory is intact after the flight was hit by two missiles within three minutes of taking off from Tehran's airport on Jan. 8, the report says.