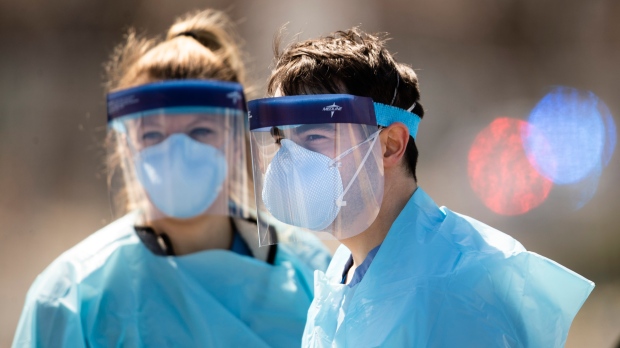 Medical workers in protective masks wait to administer COVID-19 tests at a facility in Camden, N.J., Wednesday, April 1, 2020. The new coronavirus causes mild or moderate symptoms for most people, but for some, especially older adults and people with existing health problems, it can cause more severe illness or death.(AP Photo/Matt Rourke)

Scores of countries have moved to restrict the export of face masks, gloves and other medical supplies critical for front-line workers in the fight against the COVID-19 pandemic, leaving Canada and others scrambling to source products that now have higher price tags.

Sixty-eight countries - Canada is not among them - have curbed exports of personal protective equipment or medicine, according to Simon Evenett, a professor of international trade at Switzerland's University of St. Gallen.

He called the policies “inhumane” and a potential “death sentence” for some of the world's most vulnerable patients.

“It means they're going to go without. And you don't want to think about what going without a medical ventilator means when you're seriously ill with COVID-19,” said Evenett, who runs the Global Trade Alert nonprofit, which tracks protectionism.

“Countries which use (the restrictions) are essentially grabbing a small number of supplies for the moment and denying sick people in other countries the possibility of treatment,” he said in phone interview, highlighting France and India as hoarders.

“If you think that this is going to have a happy legacy for international relations, think again.”

On Tuesday, China responded to complaints from Europe about ineffective coronavirus test kits by tightening standards around certification of medical goods for export.

The decision seeks to clamp down on defective products, but could have the effect of further slashing supply from a country that produces half of the world's personal protective equipment - also known as PPE.

Omar Allam, who heads an Ottawa-based global trade consultancy, said the move aims to bolster China's reputation, but effectively severs Canadian wholesalers from some reputable Chinese manufacturers by tacking on red tape that trips up the supply chain.

“You could have a reliable provider with a great track record, but if they don't have the required medical certificate, it could take them up to a year to get this,” said Allam, who is working pro bono to connect the Canadian government with foreign suppliers.

“This is a major blow to countries like the U.S. and Canada.”

Officials across the country this week warned that equipment shortfalls are placing health-care workers and vulnerable Canadians at growing risk of exposure to the virus.

A lack of supply and surging demand have sent prices soaring for goods from gowns to gloves, swabs and face shields.

“One government had placed an order for 200 million masks from China. And what this did overnight to the price of masks was to treble them,” Evenett said.

Air cargo rates have also shot up as airlines park planes - which often carry freight as well as passenger luggage - due to plummeting travel demand.

“There's a lack of availability of the aircraft. Each one is like gold dust to get those slots,” he said, noting taxpayers often foot the bill. “Governments are stepping up all over the world to pay for that.”

Prime Minister Justin Trudeau promised Wednesday that federal health authorities will not cut any corners when it comes to making sure masks provided by China meet the necessary standards.

The comments followed an announcement from the Chinese Embassy in Ottawa that the country is sending 30,000 medical masks along with thousands of gowns, gloves and goggles to Canada.

The shipment was announced amid reports that the Dutch government is recalling around 600,000 defective masks that were recently shipped from China. Spain has also raised concerns about Chinese-made COVID-19 testing kits that were faulty.

On Tuesday night, China's Ministry of Commerce announced that PPE - which includes COVID-19 test kits, N95 respirator masks, ventilators and infrared thermometers - can only be exported if its manufacturers show certification by a national registry and documentation proving it meets the import country's standards. The exports will be checked at customs in China to confirm the paperwork, according to the government release.

At the height of the crisis there, Beijing sought to buy virtually all of the country's medical supplies and withhold exports, Evenett said.

“Now the government is letting selected Chinese medical suppliers ship abroad. But because it's a pretty ad hoc and non-transparent system, it's pretty much tantamount to an informal export ban,” said Evenett.

“This is the worst type of short-term thinking,” he said.

Since the start of the week, more than 11 million face masks have arrived in Canada, including a shipment of one million masks that reached a Hamilton warehouse overnight, Trudeau said Thursday.

The government has spoken with nearly 3,000 companies to secure “millions of pieces of vital equipment,” he said.

Ottawa has also co-signed a statement with partners including Singapore, New Zealand, Australia and others to keep supply chains open.