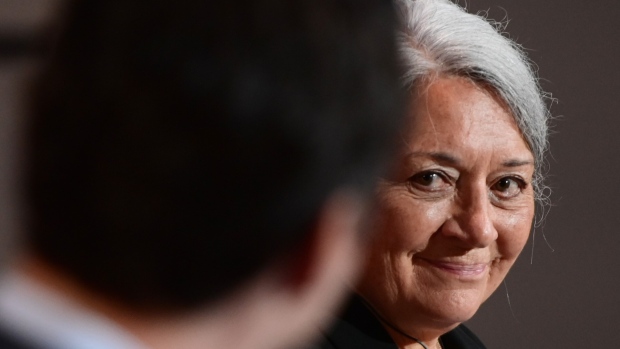 Mary Simon looks towards Prime Minister Justin Trudeau during an announcement at the Canadian Museum of History in Gatineau, Que., on Tuesday, July 6, 2021. Simon, an Inuk leader and former Canadian diplomat, has been named as Canada's next governor general â€” the first Indigenous person to serve in the role. THE CANADIAN PRESS/Sean Kilpatrick

OTTAWA - When Mary Simon uttered her first words as Canada's next governor general in her native language of Inuktitut, a collective thrill was felt among many Inuit and other Indigenous people across Canada, recognizing it as a moment to be long remembered.

“It made me very proud,” said Sen. Yvonne Boyer, a Metis lawyer and former nurse.

“It was very touching and it was something that I knew the ancestors were holding her hands as she was doing that.”

Pita Aatami, president of the Makivik Corp., which Simon led in the 1970s, echoed that feeling of excitement in hearing the traditional Inuit language being spoken and represented at the announcement of the Queen's new representative in Canada Tuesday.

“I am sure that Inuit will be celebrating across Nunavik, Nunatsiavut, Nunavut, the Inuvialuit Settlement Region, Alaska, Greenland and Chukotka today,” Aatami said.

“Having an Indigenous person as the Crown's representative in Canada sends a strong message to the nation, and to the international community. This comes at an important time in our history as we collectively work towards reconciliation.”

Simon's appointment comes at a time when Indigenous and non-Indigenous people across Canada are coming to terms with many of the atrocities perpetrated against First Nations, Inuit and Metis people throughout several centuries of history.

When colonial explorers initially claimed the lands of the place now called Canada as “terra nullius,” or vacant lands, European officials used the papal “doctrine of discovery” to displace and control the lives of Indigenous Peoples already living here, based on the notion they had racial and religious superiority.

The creation of church-run, government-funded residential schools, which aimed to assimilate Indigenous children after removing them from their families and communities, caused more pain, suffering and loss of identity, language and culture to Indigenous Peoples. Many children were physically, sexually and emotionally abused. Many did not return home.

Recent discoveries by ground-penetrating radar of what are believed to be the remains of hundreds of children, in unmarked graves, who attended these institutions, have ignited a strong desire across Canada to see justice served and more done to seek reconciliation.

Natan Obed, president of Inuit Tapiriit Kanatami, says he hopes Simon will be able to show care to those feeling fresh loss and pain spark a new relationship between Indigenous nations and the Crown.

“Whether it's the wildfires in British Columbia, or whether it's the loss of life through racism and violence. There are things that have happened in 2021 that I would hope that a governor general could weigh in on and be empathic to those who are experiencing hardships and pain,” Obed said.

He noted, however, that Simon will not only be representing Inuit in the North, but all Canadians in her new viceregal role.

“She has stellar accomplishments, not just because she is Inuk. She has the experience and the skills,” Bellegarde said Tuesday, pointing to her past work serving as Canada's ambassador to Denmark and the Canadian ambassador for circumpolar affairs.

“She will be the Crown's representative in Canada and she will do it with great dignity and tremendous grace. All Canadians should be proud that this step has been taken and she's going to do a job for all Canadians.”

While applauding Simon's appointment as an “excellent choice” and one that has made the Indigenous women they represent proud, the Native Women's Association of Canada also noted Simon is “being asked to serve the senior role in what is still a colonial system of governance.”

“To achieve true reconciliation, the federal government must re-examine its appointments of ministers to lead departments that have a profound effect on Indigenous lives - the departments of Crown-Indigenous Relations and Indigenous Services,” NWAC said in a statement Tuesday.

It is time that these two ministries are led by Indigenous people, the association added.

“It is time for the government to get out of the way and to allow Indigenous people to manage their own affairs.”

Neither Bellegarde nor Boyer believe Simon's Indigenous roots put her at odds with her new role as representative of the Crown.

Treaties that guide the partnerships between Canada and First Nations were made with the Crown, and because of that, the relationship between First Nations and the Crown is “sacred,” Bellegarde said.

Boyer believes Simon in this role can be a “bridge” toward reconciliation.