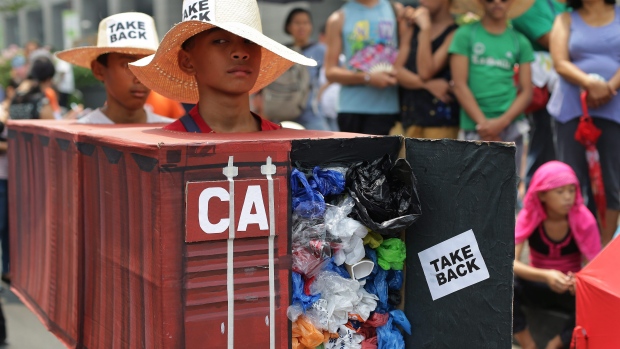 Filipino environmental activists wear a mock container vans filled with garbage to symbolize the 50 containers of waste that were shipped from Canada to the Philippines two years ago, as they hold a protest outside the Canadian embassy at the financial district of Makati, south of Manila, Philippines on May 7, 2015. THE CANADIAN PRESS/AP, Aaron Favila

OTTAWA -- The Canadian refuse rotting in the Philippines will likely find its way back across the Pacific Ocean soon.

A Canadian official speaking on condition of anonymity told The Canadian Press today there are "meaningful conversations" taking place between officials in both countries with the likely result being that Canada brings the containers home.

There remain some complex legal issues to be worked out that are slowing down the talks but the official said he thinks there will be an agreement within a few months.

The statement comes the day after Filipino President Rodrigo Duterte threatened to "declare war" on Canada over dozens of shipping containers filled with Canadian garbage that have been sitting in a Manila port for almost six years.

The Canadian company that shipped the waste labelled the containers as being full of recyclable plastics but Filipino customs agents found they instead contained mostly non-recyclable plastics, kitchen garbage and soiled adult diapers.

Duterte told Filipino media Tuesday if Canada didn't deal with the mess by next week he was going to ship the containers back to Canada himself, after dumping some of their contents on the Canadian Embassy in Manila.