TORONTO -- Canadians greeted their likely future king with a flurry of congratulations Monday, but the long-awaited announcement of the prince's birth didn't seem to spark the same frenzy that surrounded his parents' wedding.

The country's political leaders were quick to send good wishes, with many issuing statements shortly after Clarence House officially announced that the Duchess of Cambridge had delivered a son.

Prime Minister Stephen Harper hailed the arrival of "a future sovereign of Canada," calling it a "highly anticipated moment for Canadians given the special and warm relationship that we share with our Royal Family."

Gov.-Gen. David Johnston also congratulated Prince William and his wife Kate, saying that as a father of five, he knows well "the elation that a new arrival brings to a young family."

Even those opposed to the monarchy welcomed the prince's arrival.

Tom Freda, director of the organization Citizens for a Canadian Republic, said any news involving the Royal Family renews the debate over the relevance of a monarchist system, "and debate is good."

Several national landmarks -- including the CN Tower, Niagara Falls and Parliament's centre block -- were set to shine blue Monday night in honour of the newborn prince.

Anticipation surrounding the royal baby had been building in recent days, but even royal-watchers recognized it hasn't rivalled the near-obsessive excitement that ushered in the royal wedding two years ago.

"The anxiety and the anticipation that goes along with it is a little more subtle and a little more long term," said Cian Horrobin, a spokesman for the Monarchist League of Canada.

"But when the moment finally hits, it's just as exciting if not more so than the wedding," because it marks the beginning of a lifelong relationship with the prince, he said.

Carolyn Harris, an expert on royal history at the University of Toronto, said the lack of a clear due date has kept fans of the Royal Family from planning any elaborate celebrations as they did for the royal wedding.

"It's impossible to plan a party in advance for the day the baby arrives because there's been so much uncertainty about the due date and the royal baby's arrival," she said.

"With the wedding, there was a clear date that this was taking place for all those who were interested to pay attention to."

In Toronto, a TV screen in the lobby of the Royal York hotel was set to the BBC throughout the day for the latest updates from London.

When news of the birth broke mid-afternoon, hotel staff handed out flutes of bubbly to a handful of people who lingered near the screen.

The same hotel had been packed with women in ornate hats the morning of April 29, 2011, when it held a special breakfast tea service for those wanting to watch the royal wedding.

Still, sisters Linda and Deanna Whaley could barely contain their enthusiasm at the chance to publicly mark the occasion.

"My sister turned 60 today, and we were hoping the royal baby would share her birthday, and sure enough, here he is. We're very excited," Linda Whaley said.

"I think Kate and William are going to be fantastic parents and Princess Diana's sitting right on that baby's shoulder."

The hotel, which prides itself on having a special connection to the Royal Family because several members have stayed there, set up a special display that included a guestbook where well-wishers could leave a message for the Duke and Duchess of Cambridge.

Spokeswoman Sonya Singh said the display has been up for two weeks but had drawn more attention in the past few days.

A second guestbook was brought out just after noon Monday and every few minutes, another person stopped to add a message for the royal parents.

Many left simple congratulations but others penned more effusive tributes.

"Dear William and Kate, You are conducting yourselves with dignity and grace and are bringing honour to the monarchy. Many of us in Canada are very fond of you and wish you much happiness in your new lives together and as parents. May God bless you and keep you," one read.

Teresa McRae, who is visiting from London, Ont., left a message in the guestbook before the prince's birth was announced.

She called the prospect of a royal infant "exciting," but admitted she's not making as big a fuss as she did for previous milestones in the monarchy.

McRae organized a celebratory breakfast for the wedding of Prince Charles and Diana, watched Diana's funeral with friends and hosted a pre-dawn viewing party for Prince William and Kate's wedding.

But she's made no such plans for the birth, citing "a busy summer."

Robertson, who lives in the Toronto area, said she feels a special connection to Prince Charles because she is also set to become a grandparent for the first time.

Hertgers, in town from British Columbia for a dairy farmers conference, didn't share her friend's enthusiasm.

"I'm here because she's into it," she joked. 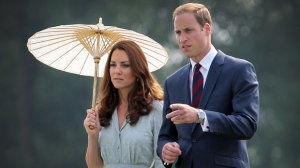 Some key moments in Kate and William's relationship 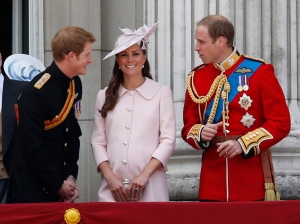 Kate's pregnancy style has been the focus over the last nine months. 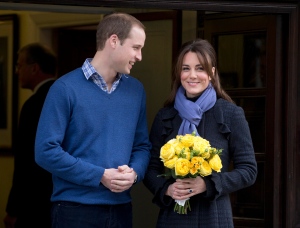 The Peace Tower and Parliament buildings are illuminated in royal blue to celebrate the birth of a royal baby on Monday, July 22, 2013 in Ottawa. (The Canadian Press/Adrian Wyld) 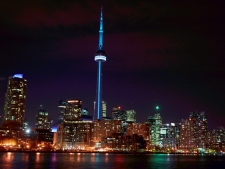 Toronto's iconic CN Tower welcomes the birth of the royal baby. In honour of the birth of His Royal Highness Prince of Cambridge, CN Tower lighting will be solid blue on July 22, 2013, the evening the birth was announced in Canada. (The Canadian Press/CN Tower)