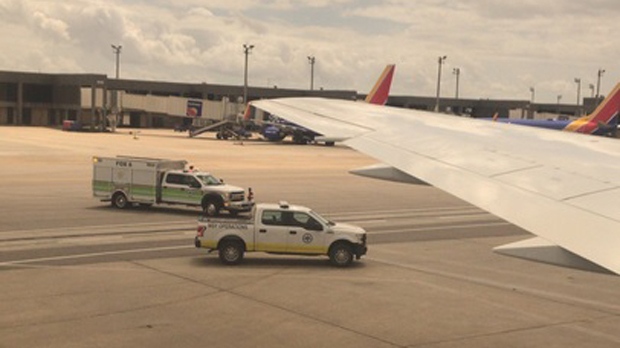 Emergency vehicles are seen from the cabin of a Sunwing flight from Pearson diverted to New Orleans due to mechanical trouble on March 30, 2019. (Twitter/@MarceloGW)

A Cancun, Mexico-bound Sunwing flight was forced to make an emergency landing in New Orleans on Saturday afternoon after experiencing engine trouble, stranding passengers for more than seven hours.

Sunwing Flight 511 took off from Pearson after 10 a.m. Saturday but a passenger tells CP24 the Boeing 767-300 had to land at Louis Armstrong International Airport in New Orleans at 1:32 p.m.

The viewer says the crew told passengers the landing was due to low oil pressure in an engine.

The passenger says the crew has informed them that the airport cannot accommodate their plane at the terminal.

Several passengers aboard the plane sent messages on social media to the company about not being able to disembark in New Orleans.

Another passenger said that the occupants of the plane were put in the basement of the airport approximately six hours after it landed in New Orleans with no news on when another plane would arrive.

The plane that suffered mechanical trouble was recently leased by Sunwing from Eastern Airlines, according to publicly available aircraft registration data.

It was leased to cover the loss of four Boeing 737 Max 8 aircraft that were grounded by Transport Canada on March 13 in wake of the Ethiopian Airlines disaster.

Just after 7:45 p.m., another Sunwing jet took off from Miami to pick up the stranded passengers and take them to Cancun. It is expected to arrive at 9:35 p.m.

After an emergency landing @SunwingVacay has all 200+ passengers locked in the basement of New Orleans airport wth no news, no plan. No one from the crew to inform and the call centre says “we are working on it, keep waiting”. Shame on @SunwingVacay @CTVNews @CBCNews @CP24 pic.twitter.com/4IHEY0XQE2

After an emergency landing @SunwingVacay has all 250+ passengers locked in the basement of New Orleans airport with no news, no plan. No one from the crew is to be seen, the call centre says “we are working on it, keep waiting”. Shame on you #sunwing @CTVNews @CBCNews @CP24 pic.twitter.com/m1uJ8wpy66

A Sunwing plane is seen here in this file photo.