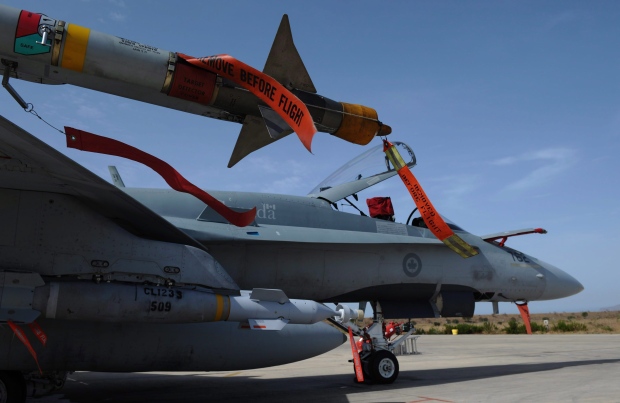 A CF-18 sits loaded for flight at Camp Fortin on the Trapani-Birgi Air Force Base in Trapani, Italy, on Thursday, Sept. 1, 2011. (The Canadian Press/Sean Kilpatrick)

OTTAWA -- Canadian warplanes have been in action in Iraq once again, bombing enemy targets ahead of Kurdish Peshmerga forces who are pushing to completely break the siege in the Sinjar mountains.

The region along the Syrian border was home to many members of the Yazidi minority before extremist fighters swept in last August, killing or abducting hundreds and prompting tens of thousands of refugees to flee through the mountains.

The extremists had erected "defensive fighting positions and safe havens, places where they can engage from," Constable said in a teleconference from an undisclosed base in Kuwait where the Canadian jets are based.

"We were requested to take those fighting positions out."

It is part of a stepped-up air campaign by the U.S.-led coalition battling militants from the Islamic State of Iraq and the Levant. The coalition carried out 61 strike missions from Dec. 15-17.

Since beginning combat operations in late October, the CF-18s have flown a total 130 sorties and carried out nine bombing runs.

The Peshmerga, according to local media reports, launched a two-pronged assault on the region Wednesday and claimed some success with the apparent liberation of three villages.

Local commanders claimed Thursday they had secured a route into the region.

One line of the offensive runs from Mosul dam towards the encircled mountains, where U.S. and Australian transport planes have been dropping humanitarian supplies to the hundreds refugees still clinging to the mountainside.

Earlier in the fall, the Kurds were able to temporarily open a corridor into the area but have been unable to keep it open.

Constable said he believes there are signs ISIL has over-extended itself, but declined to characterize the kind of fight Kurdish forces are facing on the road to Sinjar.

That was something for a higher U.S. headquarters -- or Iraqi officials -- to comment on, said Constable, who suggested the momentum was shifting slowly from halting the expansion of ISIL towards pushing them back.

"For the most part, I would say we've seen nothing but them being on the defensive and the strikes that have been in the last few days have been showing that."

Iraqi forces have, for the most part, been tied up safeguarding an annual Shiite pilgrimage; now that it's over, they are expected to begin trying to retake territory from ISIL fighters.

But Lt.-Gen. James Terry, the U.S. commander overseeing the mission in the region, called for patience, saying the campaign would take "at least take a minimum of three years."

At the same time, the Wall Street Journal reported Thursday that at least three top Islamic State officials had been killed in operations over the last few weeks.

Gen. Martin Dempsey, the chairman of the Joint Chiefs of Staff, told the newspaper the operations are part of an expanding coalition effort ahead of a planned offensive next year by Iraqi forces.

Constable wouldn't speculate on whether Canada's combat mission, due to expire in April, will be extended.

Plans are being drawn up that detail how the air force would carry on and separately the branch is drafting proposal for winding things down, he said.