Children afraid of father in Kuwait can stay in Canada for now, court says 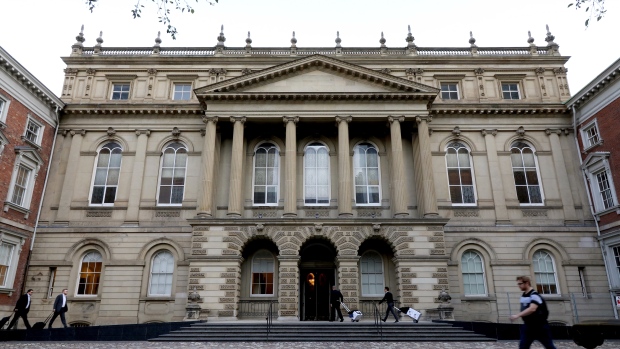 Osgoode Hall is seen in Toronto on Wednesday, Sept. 25, 2019. THE CANADIAN PRESS/Colin Perkel

TORONTO - Three children should not be sent back to their allegedly abusive father in Kuwait pending the outcome of their parents' custody dispute in Canada, Ontario's top court ruled Wednesday in a case that attracted United Nations attention.

In setting aside an order that the two boys and a girl should be returned to the Middle East, the Ontario Court of Appeal found the judge had failed to recognize the risk they faced.

“The evidence establishes that the children would, on a balance of probabilities, suffer serious harm if returned to their habitual residence of Kuwait,” the Appellate Court found. “Ontario therefore may, and should, exercise jurisdiction to determine custody and access.”

Evidence showed the family enjoyed a good life in Kuwait but the couple separated after a decade of marriage in 2018 after she alleged he had attacked her in front of the children. The man's wife said it was part of a pattern of ongoing personal and sexual violence, an allegation he denied.

The couple, both Jordanians, started proceedings in family court in the emirate. The mother, who like the others involved cannot be named publicly, soon opted to leave for Canada. Without telling their father, she took the three children now aged 4, 7 and 11 with her.

A Kuwaiti court subsequently convicted and fined her for kidnapping. It also ordered her to “enter into submission” and “obey her husband,” court records show.

The mother and children sought refugee status in Canada on the grounds that her husband was abusive and posed a danger to the family.

In court in Ontario, the father argued his wife had kidnapped their children and asked they be returned to Kuwait. He produced evidence that he was a non-violent, loving parent and that his wife was making up allegations to be near family in Canada.

The mother in turn asked the court to decide the custody battle, saying the children would be in danger if forced to leave.

In February, Superior Court Justice Lucy McSweeney decided she had no jurisdiction to weigh in because the children were not at risk. Among other things, she found the mother's testimony unreliable, exaggerated and self-serving, and said the Kuwaiti courts would treat her fairly.

McSweeney rejected the children's fears of their father, saying they had been influenced by their mother. Despite the pending refugee application, she ordered them sent back to Kuwait. The judge was wrong on both counts, the appellate court found.

The higher court faulted McSweeney's handling of the children's evidence, presented through the Office of the Children's Lawyer:

“The child described his father as mean, angry and threatening,” court records show the 11-year-old told an investigator. “He described being hit with a belt and threatened with a hot iron.”

McSweeney, the Appeal Court said, should have accepted the evidence from the children and experts who testified.

“She reframed their evidence as a mere preference to remain in Canada,” the court said.

Interveners who weighed in on the appeal included the UN High Commissioner for Refugees and Amnesty International. Both argued McSweeney was wrong to order the children returned while their asylum claim was outstanding. The Appeal Court agreed.

“Children are entitled to protection as they seek asylum,” the court said.

The higher court ruled Ontario has jurisdiction to decide the custody dispute and ordered the father to pay his wife $25,000 to cover her appeal costs.

This report by The Canadian Press was first published on July 29, 2020.