Mayoral candidate Olivia Chow says the time has come to “pack up the circus tent at city hall” and get back to the business of running the city.

Chow made the comment to about 750 supporters during a rally at a North York hotel Sunday afternoon in what was her first campaign event since announcing her candidacy on Thursday.

“It is time to return to the tradition of working together to get things done and that’s the way it will be after we replace Rob Ford and after we replace all that nonsense that comes with Rob Ford” Chow said to applause. “We will get this city moving again.”

Chow didn’t unveil any major planks of her platform during her 15-minute speech, but she did speak of the importance of putting children “at the heart of the city” and “minding the public purse.”

The former NDP MP also reiterated her support for scrapping the Scarborough subway in favour of a less expensive and more comprehensive light rail transit line.

“I have too much respect for the people of Scarborough to tell them that they must wait another 10 years before they get better transit,” she said. “We already have wasted four years and we can do better than that. We can put shovels in the ground now and build a better train service four years faster with four more stops and for $1 billion dollars less.”

The extension of the Bloor-Danforth subway line into Scarborough carries a $2.5 billion price tag of which $1.4 billion is being covered by the province with the federal government chipping in another $660 million. The city is making up the estimated $400 million shortfall by hiking property taxes by 1.6 per cent over the next three years.

Asked whether it was too late to revert to the previously approved light-rail transit line following her speech, Chow said that she was confident she would be able to work with government partners to do exactly that.

“We need to move people now,” she said.

Though the mayoral campaign technically began on Jan. 2, Chow is the first candidate to hold a major rally. 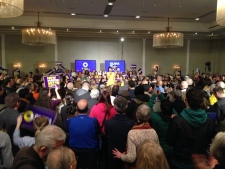